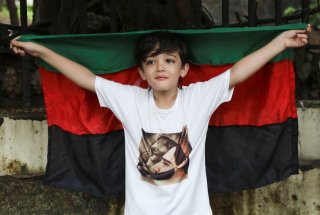 The United Nations has condemned the Taliban for its “increasingly violent response” to protests, according to a statement put out by the Office of the High Commissioner for Human Rights.

Since the fall of Kabul to the militant group on August 15, a number of demonstrations and protests have taken place across the country—in many cases featuring the red, black, and green national flag, which the Taliban has largely tried to replace with their black-and-white banner depicting the shahadah.

Other protests have taken place in support of women’s rights. An uptick in protests occurred last week, after the Taliban’s transitional government was formed—notably without the inclusion of women or some ethnic minorities within Afghanistan, including the predominantly Shi’a Hazaras.

In response to the demonstrations, Taliban fighters have used batons, whips, and live ammunition, according to the report. It is unclear how much of the violence was directed from the group’s leadership, and how much was caused by local commanders acting on their own authority. The report claimed that at least four Afghans had been killed while protesting in recent weeks.

"We call on the Taliban to immediately cease the use of force towards, and the arbitrary detention of, those exercising their right to peaceful assembly and the journalists covering the protests,” the statement read.

While the Taliban has indicated that there would not be recrimination against those who fought against them during Afghanistan’s twenty-year war, they have also forbidden “unauthorized” public gatherings and selectively blocked telecommunications services across the country.

In addition to the crackdown against protestors, Taliban fighters have also engaged in violence against journalists, with several Afghan reporters informing the BBC that they had been detained and tortured by the group after they attempted to cover the protests.

The UN report is the latest indication that the group remains tied to violence in its past, even as it has expressed a desire to end the war and move on from the conflict.

Afghanistan also faces severe economic problems. The UN World Food Program reported on Friday that more than nine in ten Afghan households were not eating enough. In addition to the economic downturn caused by the fighting, a drought in the country led to nearly half of the wheat crop being lost.

Additionally, aid work has become significantly more difficult in the country, and U.S. and European financial institutions have blocked further investment or relief.