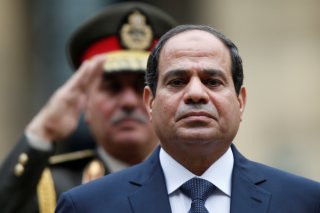 The U.S. Department of State has called for a “thorough, transparent, and credible” investigation into the death of Ayman Hadhoud, an Egyptian economist and critic of President Abdel Fattah el-Sisi, after the Egyptian government announced that he had died in an Egyptian state mental health facility.

The State Department was “deeply disturbed by reports surrounding the death and custody of Egyptian researcher Ayman Hadhoud and allegations of his torture while in detention,” according to a statement read by spokesman Ned Price during a press conference on Monday.

“The circumstances of his detention and his treatment, and of his death, we think require a thorough, transparent, and credible investigation without delay,” Price said.

The Egyptian government had first detained Hadhoud in February and remanded him to the psychiatric hospital in Cairo, where he died in March. At the time, Egyptian authorities indicated that they had conducted an investigation revealing “no criminal suspicion” related to the death, claiming it had come about because of “hypotensive shock and cardiac arrest” unrelated to his treatment.

However, Amnesty International claimed that Hadhoud had been tortured, based on public records, private interviews with others at the mental health facility, and the examination of leaked photos of the corpse. It described the Egyptian government’s statements attributing Hadhoud’s death to natural causes as “contradictory” and “implausible,” and noted that the government’s explanations for his initial imprisonment in the facility were also contradictory.

The National Council for Human Rights, a prominent Egyptian human rights organization, also suggested that Hadhoud had been made a victim of “forced disappearance,” a practice wherein Egyptian citizens are detained without trial and their families are not informed of their whereabouts. Although Hadhoud was imprisoned in February, Egyptian officials at the hospital reportedly denied that he was present to his family when they attempted to visit him. Amnesty also noted that although Hadhoud was said to have died in March, the Egyptian government did not make his death public until April. The Egyptian government has denied these charges.

Hadhoud is the fifth Egyptian known to have died while in state custody this year, according to Democracy in the Arab World Now (DAWN), a Middle Eastern human rights group. More than 1,000 Egyptian citizens are known to have died in prison since 2013, the year el-Sisi took power.