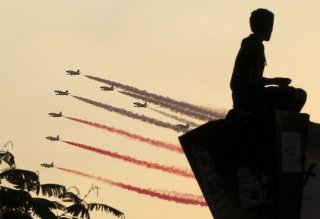 “No more is it necessary or appropriate to support vocal enemies of the United States because they invoke the rhetoric of popular liberation.” — Amb. Jeanne Kirkpatrick

In the Middle East, the new U.S. administration once again faces the familiar choice of supporting traditional authoritarian governments through diplomatic and security partnerships or watching these countries turn toward alternatives at least as bad and probably worse—and almost certainly hostile to the United States.

Nearly half a century ago during the Carter administration, Amb. Jeanne Kirkpatrick, a noted diplomat and political scientist, penned a famous essay “Dictatorships and Double Standards,” describing how the administration’s rigid adherence to utopian ideals contributed to delivering key U.S partners a totalitarian nightmare. Her words sound the warning for us today:

“The foreign policy of the Carter administration,” she said, “fails not for lack of good intentions but for lack of realism about the nature of traditional versus revolutionary autocracies and the relation of each to the American national interest. Only intellectual fashion and the tyranny of Right/Left thinking prevent intelligent men of good will from perceiving the facts that traditional authoritarian governments are less repressive than revolutionary autocracies, that they are more susceptible of liberalization, and that they are more compatible with U.S. interests.”

President Barak Obama in his historic June 2009 New Beginning speech in Cairo may have intended to signal that realism would finally catch up to the aspirations of those who continued to view Egypt as the historic heart of the Arab world. He argued that with American diplomacy and assurances of a more benevolent approach to mutual respect, concrete actions would demonstrably reduce extremism.  Of course, that did not happen.

Apparently, even the former president has realized the folly of substituting hope for policy and words for reality.  In his most recent writings, Obama admits that “in the end, the facts of what happened are the facts and I'm left with the same set of questions I first wrestled with as a young organizer. How useful is it to describe the world as it should be when efforts to achieve that world are bound to fall short? . . . [Is] it possible that abstract principles and high-minded ideals were and always would be nothing more than a pretense, a palliative, a way to beat back despair, but no match for the more primal urges that really moved us . . . no matter what we said or did?”

Would that the Obama administration officials now leading the Biden administration’s statecraft were more aligned with Kirkpatrick’s clear-eyed realism than the disappointments of the Obama Middle East policy. Early indications suggest that with respect to the Middle East, the Biden administration appears to have returned largely to the engagements undertaken by many of the same officials under Obama as if the four years of Trump foreign policy can be stricken from our collective memory.

At the same time, the Biden administration has opted to uphold former Egyptian prime minister Hazem el-Beblani’s immunity from prosecution for the numerous human-rights crimes committed under his short-lived tenure. A former Egyptian political prisoner (and U.S. citizen) Mohamed Soltan who was shot, arrested and imprisoned in August 2013 commented that “this attempt to isolate a torturer from accountability in U.S. courts is a blank cheque to Egypt’s dictator and wholly antithetical to Biden administration’s stated commitments to a human-rights centered foreign policy.”

Further, in February, the Biden administration approved an arms sale to Egypt saying in its official statement: “This . . . sale will support the foreign policy and national security of the United States by helping to improve the security of a major non-NATO ally country that continues to be an important strategic partner in the Middle East.”

Kirkpatrick’s practical approach is sorely needed as the U.S. navigates a complex and quickly changing world. Her argument that revolutionary autocracies have historically never led to representative democracy remains a core truth of the modern world. Autocracy has historically led to mass displacement and refugee migration, large-scale human-rights violations and, in some cases, widespread starvation. Modern examples of revolutionary autocracies include the Chinese Communist Party, the so-called Iranian Revolution, and the Islamic State. These autocracies have not led to more democratic results than the now historic examples, including  Soviet communism, on which Kirkpatrick was particularly focused.

Indeed, some in the current foreign policy community appear to believe that human rights should serve as a litmus test for America’s foreign policy relationships. While few people will argue that attention to the rights and well-being of the fellow inhabitants of this earth must be part of U.S. foreign policy, diplomacy is first and foremost about recognizing divergent interests and seeking an achievable balance. While concern for the inalienable rights of mankind is fundamental to who America is as a nation, the country should not sacrifice progress within the realm of the possible for the unachievable or, worse, the further persecution of the oppressed dressed up as the ostensible voice of the people. Americans may not like dictatorships, particularly the way those dictatorships handle human rights—but over time, some traditional authoritarian governments have adapted to include constitutions and other foundations of a representative government, including in the Middle East.

Invoking the examples of China prior to the fall of Chiang Kaishek, pre-Castro Cuba, the Vietnam War and Angola, Kirkpatrick have noted that “In each of these countries, the American effort to impose liberalization and democratization on a government confronted with violent internal opposition not only failed, but actually assisted the coming to power of new regimes in which ordinary people enjoy fewer freedoms and less personal security than under the previous autocracy–regimes, moreover, hostile to American interests and policies”

Egypt is a perfect case in point. Egypt’s short-lived Muslim Brotherhood-led government was ideologically driven and an unmitigated disaster for both governance and the Egyptian people. The Brotherhood was founded on its members’ desire to establish an Islamic state, governed under shariah law. This political movement was—and is—against American interests. The last thing the United States and Egypt’s neighbors in the region need is a totalitarian Islamist state in Egypt. Moreover, a Muslim Brotherhood dictatorship extending its reach outside Egypt’s borders would pose a significant risk to regional stability, including U.S. and western interests, as well as desired improvements to Egyptian human-rights practices.

It is not a defense of the current regime to argue that Egypt under the Muslim Brotherhood would be far worse than Egypt under Abdel Fattah el-Sisi. Rather, it is a clear-eyed assessment based on the body of evidence available to us through the writings of the Muslim Brotherhood’s various leaders spanning nearly a century. Broadly, this argument is a defense of American interests. As such, the United States should support Egypt to further contain the Muslim Brotherhood both inside and outside its borders in order to prevent the rise of another revolutionary autocracy which ultimately would be far more destructive to human rights.

Egypt plays a critical role not only in the Muslim world but as an important U.S. ally in the region. In addition, Egypt is a core ally of Israel. Thankfully, Egypt has been at peace with Israel for over forty years. It is in the U.S. interest to provide support to ensure this remains the case.  However, it is not difficult to contemplate that a country governed by totalitarian Islamic extremists may not take the same approach in its relations with the Jewish state. The new U.S. administration should continue to adopt the practical approach advocated for by Kirkpatrick and build a stronger Egypt where human-rights abuses are both rare and addressed by pushing back against the potential for any new regime where the Egyptian people have diminished freedoms and security.

Simone Ledeen has served in various U.S. government and business leadership positions, most recently as the presidentially appointed Deputy Assistant Secretary of Defense for Middle East Policy where her leadership of U.S. defense policy spanned Bahrain, Egypt, Israel, Iran, Iraq, Jordan, Kuwait, Lebanon, Oman, Palestinian Authority, Qatar, Saudi Arabia, Syria, United Arab Emirates and Yemen. She is a senior fellow at the Middle East Institute and visiting fellow at the National Security Institute of George Mason University’s Antonin Scalia School of Law where she advocates for policies to foster global security and facilitate international business. Ledeen has an MBA from the Bocconi University School of Management in Milan, and a Bachelor of Arts degree from Brandeis University.