Will Stolen Grain Cause a Crisis Between Lebanon and Ukraine? 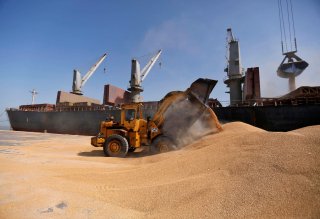 The Laodicea, a Syrian-owned vessel sanctioned by the United States, entered the port of Tripoli in northern Lebanon on Thursday, allegedly carrying a cargo of 10,000 tons of barley and flour—much or all of it thought to have been stolen from Ukrainian grain silos in the country’s Russian-occupied eastern regions.

The Ukrainian Embassy in Beirut, Lebanon’s capital, announced on Thursday that the Laodicea, which had earlier departed from a port on the Russian-occupied Crimean Peninsula, had docked in Tripoli within the past day. The embassy claimed that the grain onboard had been stolen from Ukraine, but it did not specify how it had traveled from the grail silos onto the ship.

The Laodicea, which has been the subject of U.S. sanctions since 2015 due to its Syrian ownership, was originally slated to dock at the Syrian port of Tartus, to the north of Tripoli. It is not yet clear why the ship instead docked at Tripoli, or if it intends to unload its cargo there. However, to preempt the sale of the stolen grain, Ukrainian ambassador to Lebanon Ihor Ostash met with Lebanese president Michel Aoun, warning him that purchasing the grain would “harm bilateral ties” between the two countries, according to the statement released by the embassy.

Although much of the Middle East has remained neutral during Russia’s ongoing invasion of Ukraine, Lebanon has supported Kyiv, voting in favor of a resolution condemning Russia’s aggression in the opening days of the conflict. In gratitude for Beirut’s support, Ukraine has promised to export further wheat to Lebanon, helping to ameliorate a major food crisis and widespread hunger since the meltdown of its financial sector in late 2019, although the Russian blockade of the Black Sea has impacted Ukraine’s deliveries abroad. The Ukrainian embassy’s statement claimed that Kyiv would “continue to be a reliable partner of Lebanon and ensure its food security.”

An anonymous customs official later claimed that dockworkers had immediately suspended unloading the ship’s cargo after the news emerged that its cargo might have been illegally obtained.