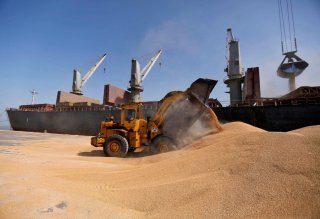 Ukraine’s deputy agriculture minister, Taras Vysotskiy, accused the Russian military of stealing “several hundred thousand tons” of wheat from areas of Ukraine that it has occupied since the onset of the invasion on February 24, according to Reuters.

Vysotskiy’s accusations, made on Ukraine’s state-run television station on Saturday, reiterated a claim that had previously been made by Ukraine’s Foreign Ministry and by Ukrainian agriculture minister Mykola Solskyi, who had argued in the preceding week that grain was being offloaded from Ukrainian silos and shipped east. The deputy minister added that Russia could theoretically steal an additional 1.5 million tons of grain stored within the occupied eastern territories.

Russia and Ukraine are two of the world’s largest grain exporters, and the conflict between them has sharply impacted global grain markets, leading to supply disruptions that have triggered violent unrest in some areas. The United Nations estimated in mid-April that shocks to world grain markets would lead 1.7 billion people to fall into food insecurity.

The Ukrainian Foreign Ministry wrote in a tweet that the continued theft of Ukrainian grain would lead to “a humanitarian disaster [and] the world’s food security crisis.” To end the crisis, the ministry demanded that Russia “stop illicit grain stealing, unblock Ukrainian ports, restore freedom of navigation, and allow trade ships to pass.”

Ukrainian sources have described the region surrounding Kherson, the city on the Black Sea opposite the Russian-annexed Crimean Peninsula, as the epicenter of Ukrainian grain theft. Kherson has been occupied since early May and remains the only Ukrainian provincial capital captured by Russian forces. Solskyi added that he had “personally [heard] from many silo owners in the occupied territory,” claiming that Russian troops had unloaded their grain silos and taken the contents away.

“This is outright theft,” the agriculture minister said. “And this is happening everywhere in occupied territory.”

The Kremlin denied its involvement in the grain theft.

Since the beginning of the war, Ukrainian officials have implicated Russian troops in a variety of crimes, including thefts of household items and consumer goods from occupied areas. However, most previously reported instances of theft have been low-level crimes, rather than industrial-scale pillage of the Ukrainian economy.

Ukraine grew eighty-six million tons of wheat in 2021. Its output for 2022 is projected to be 41 million tons, largely due to disruption from the war.