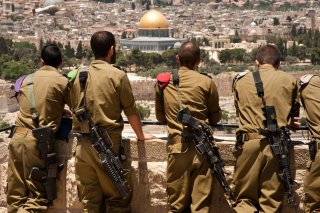 Since the establishment of the State of Israel, the Temple Mount has served as a narrative that Palestinians and extremists from the Arab-Israeli community have used to institutionalize the culture of the Al-Aqsa Mosque. This is a culture that arouses the masses, is emotional, and can mobilize the Arab-Israeli street and the Palestinians, as well as the Arab street in other Sunni countries.

Events surrounding the Temple Mount can pour fuel on the fire of the Israeli-Palestinian conflict, and ignite an inferno, literally, within hours.

On the Israeli-Jewish side, the issue also serves as a detonator for extremist radical elements, who preach incessantly for the establishment of a Jewish foothold on the Temple Mount and wish to fly a red flag in front of the bull. Activities of this nature can upend Israeli government policies and the State of Israel’s ability to maintain law and order in Jerusalem.

In Benjamin Netanyahu’s new cabinet, several parties have full-fledged right-wing lawmakers coming to power for the first time. The Temple Mount is part of the political hardcore environment that they grew up in.

National Security Minister Itamar Ben Gvir’s ascension to the Temple Mount on January 3 has far-reaching implications as it threatens the delicate security balance in Jerusalem, in the territories controlled by the Palestinian Authority, and in Gaza. His decision to ascend the Temple Mount in one of his first acts as a minister was a deliberate provocation against Arab citizens of the State of Israel, Palestinians, and the Arab states of the region. It is clear that from now on, every move and every statement made by Ben Gvir and some of his colleagues will come under scrutiny and in the near future will trigger a response, perhaps in words but also possibly in actions.

Before ascending to the Temple Mount, Ben Gvir should have adopted the maxim, “think first, act later.” Still, it is important to clarify that the status quo on the Temple Mount has not changed, and there is no plan to change it.

Netanyahu had the option—one that he has adopted in the past—to instruct his ministers to refrain from visiting the Temple Mount and allow only rank-and-file ministers of the Knesset to do so. So far, he has yet to implement such a policy this time around.

At the same time, Hamas has good reasons to avoid going to war over this issue. The current situation (where Gaza is quiet, but the West Bank is witnessing an increase in terrorist attacks and clashes between Palestinians and Israeli forces), together with the declining status of the Palestinian Authority, serves Hamas’s strategy well. This has been the case since May 2021 when Hamas initiated a conflict with Israel to portray itself as the protector of Al Aqsa.

Hamas is currently hard at work rehabilitating its military force in Gaza, while at the same time exploiting opportunities to improve the strip’s economy and alleviate some of the pressure on it.

Israel has granted some 20,000 work visas for Gazans, who bring much-needed cash into the Gazan economy. Meanwhile, Hamas is strengthening its collaboration with Hezbollah, Iran, and regional terror elements to optimize its position on the day the ceasefire is called off.

In the near future, the Islamic holiday of Ramadan, which begins on March 26, could have game-changing potential in the conflict between the Palestinians and Israel. And the Temple Mount’s role could be critical here.

The month preceding Ramadan is historically associated with an increase in hatred and religious agitation. This is when it will be easiest to spark an explosion among Palestinians and Arab Israelis on the streets of East Jerusalem and in Israel. Israel’s strategy, particularly that of this new government, must be aimed at preventing this scenario wherever possible.

Major General Eitan Dangot is a publishing Expert at The MirYam Institute. He concluded his extensive career as the Coordinator of Government Activities in the Territories (C.O.G.A.T.) in 2014.