Will Turkey Drag America Into a ‘World War III Scenario’ With Russia? 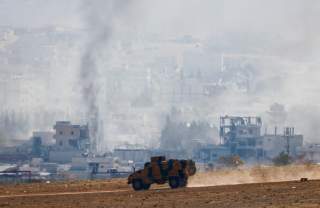 Russia and Turkey are headed towards a Cold War nightmare scenario after fighting between the two major powers in Syria left two Turkish soldiers dead.

Syrian ruler Bashar al-Assad is driving his forces into Idlib, the last rebel-held stronghold in Syria, with Russian support. Turkey faces a humanitarian crisis on its borders as up to two million Syrians fleeing Assad’s rule are left with nowhere else to go, and Turkish forces have entered Idlib to stop the offensive. Now, the United States is mulling over its response to the escalating tensions.

The fresh concerns about America’s role in the region come on the heels of an airstrike by either Russian or pro-Assad forces, which killed two Turkish soldiers during a rebel counter-offensive east of Idlib on Thursday. In response, the Turkish military has reportedly asked the United States to deploy anti-aircraft missiles and launch air patrols in Turkey in order to deter Russia.

“The North Atlantic Treaty Organization [NATO] has never seen fighting of this intensity this close to the border of a member state,” said Amb. Robert Ford, the last U.S. ambassador to Syria, at a Thursday press conference at the U.S. Capitol.

The prospect of a NATO intervention in Syria has exposed fault lines between the State Department and the Defense Department over the U.S. mission in Syria. The State Department has been Turkey’s closest remaining ally in Washington after the Turkish military began using Russian anti-aircraft missiles and attacked U.S.-backed, Kurdish-led forces in northeastern Syria.

But the U.S.-led “military coalition is focused on defeating ISIS in the eastern part of Syria,” Combined Joint Task Force Operation Inherent Resolve spokesman Col. Myles Caggins said in a Sky News interview on Wednesday. Caggins referred to Idlib as a “magnet for terrorist groups” who are “a nuisance, a menace and a threat to civilians.”

“We continue to call on pro-regime forces to halt the offensive and allow for humanitarian efforts in the area,” he added in a later statement.

The U.S. military had earlier called for de-escalation.

“We're seeing the Russians and the Turks have come very close to having more extensive conflict in the area. We're hopeful that they will find a solution to avoid that,” said Department of Defense spokesman Jonathan Hoffman on Wednesday. “There needs to be a political settlement in Syria that will be for the best interests of the Syrian people.”

The State Department has signaled stronger support for Turkey and the Turkish-backed rebels in Idlib since Assad began his offensive in early February.

“Today, in Idlib, our ally Turkey's soldiers are facing a threat,” Jeffrey declared in Turkish. “We have martyrs on the ground.”

Jeffrey told Turkish television two days later that Russia, Iran, and Assad will come to the table once they “see that they’re not going to make any more [military] progress without coming into conflict with us . . . or the Israeli Air Force or Turkey.”

Additionally, two former State Department officials called for the United States to back Turkey against Russia at a Thursday press conference at the U.S. Capitol.

Wa’el Alzayat, who served under both Ford and Jeffrey, emphasized that Assad’s record of atrocities “makes whatever ISIS did pale in comparison.”

He called for “urgent action to provide political and material support to Turkish forces today who are currently serving as a last line of defense, urgent action for NATO to signal to Russia that what is happening on its border is unacceptable, and we’ll defend an ally.”

“I think it is important that the government of the United States, governments in the North Atlantic Treaty Organization, meet with Turkish officials to discuss how one could establish a safe zone for Syrian civilians on the Syrian side of the Syrian-Turkish border,” Ford himself said. “The Turks can help with the safe zone from inside Turkey, but because they’re facing Russia, they will need help from the United States.”

Ford emphasized to the National Interest that he is not calling for U.S. forces to deploy in Syria itself, adding that a U.S. incursion into Idlib with “combat air patrols” could mean a “World War III scenario.”

U.S. forces are already deployed to northeastern Syria alongside Kurdish-led counterterrorism forces. They reportedly killed a local man during a clash with a pro-Assad militia on February 12, and nearly ran a Russian military vehicle off the road in a confrontation on Wednesday.

“The Coalition’s goal is to de-escalate any unplanned encounters with other forces operating in northeastern Syria,” Caggins told the Military Times after Wednesday’s incident.