That One Time the U.S. Air Force Covered Up a Stealth Bomber Disaster 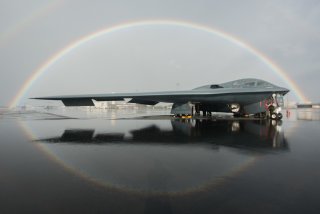 On Feb. 26, 2010, a U.S. Air Force B-2 stealth bomber forward-deployed to America’s giant Pacific airbase in Guam was getting ready for a training flight when one of its four jet engines burst into flames.

Firefighters extinguished the blaze and the crew escaped unharmed. A Guam newspaper phoned Air Force spokesman Lt. Col. Kenneth Hoffman, who reassured the paper that the fire was “minor.”

But that was a lie—the depth of which became apparent years later. The cover-up was one of a long chain of obfuscations by the U.S. military in the wake of serious and even fatal accidents involving its most high-tech and expensive warplanes.

Far from being minor, the fire underneath the radar-evading B-2’s skin caused serious damage that rendered it unable to fly—a big deal, considering that the Air Force possesses only twenty of the giant bombers. The B-2s, normally based in Missouri, are the only long-range American warplanes able to slip past heavy enemy defenses.

Northrop Grumman built twenty-one B-2s for the Air Force between the 1980s and early 2000s at a total cost of more than $40 billion. A small number of the bat-wing bombers rotate through Guam in order to put them within quick flying time of America’s Pacific rivals, including China. But the Pacific ops are risky: in 2008, a B-2 crashed in Guam, reducing the stealth bomber fleet to just 20 planes.

Losing another B-2 in Guam not two years later obviously had the potential to be hugely embarrassing for the flying branch. For more than a year after Hoffman dismissed the latest accident as “minor,” no one outside of the Air Force had any idea that the B-2, named Spirit of Washington, had nearly been destroyed and was, in fact, stuck in Guam.

The Air Force did not list the fire in its official tally of B-2 mishaps, but a presentation by a pair of military researchers in October 2010 did acknowledge the incident … and stressed the unexpected difficulties that airmen faced trying to smother a blaze underneath the bomber’s special radar-absorbing skin.

The first major indication that Hoffman, and indeed the entire Air Force, had been less than truthful about the B-2’s condition came in August 2011, when the flying branch released a feel-good official story describing efforts to get Spirit of Washington back into flying shape so that the bomber could return to the mainland United States for permanent repairs.

The official story ret-conned the bomber fire to “horrific” and described the “Herculean” task of shipping new parts to Guam in order to patch up the crippled airplane, get it back into the air and shepherd it across the vast Pacific to Northrop Grumman’s secretive stealth warplane factory in Palmdale, California. “The task list was long and included rebuilding some structural components,” the Air Force admitted.

Spirit of Washington spent the next two years in Palmdale being rebuilt by Northrop Grumman in the same facility that produces top-secret stealth drones. Another official story in December 2013 detailed the huge extent of the repair work. “A percentage of the parts could be re-manufactured, but other parts could only be obtained from Air Force spare parts depots.”

On Dec. 16, 2013, the restored Spirit of Washington took off on its first training sortie since the 2010 fire. Four days later, the Air Force announced the bomber’s return to duty—and the increase in the operational B-2 fleet from 19 airframes to 20.

The cover-up was consistent with the Pentagon’s handling of incidents involving its most sophisticated warplanes, which besides the B-2 also includes the F-22 stealth fighter and the V-22 tiltrotor. The complex V-22 takes off and lands like a helicopter but cruises like an airplane thanks to its rotating engine nacelles.

For years, F-22 pilots complained of oxygen deprivation apparently resulting from inadequate equipment in the high- and fast-flying plane, which costs up to $300 million apiece. In 2010, Capt. Jeff Haney died after crashing his F-22 in Alaska. The evidence strongly indicated that Haney had blacked out, but that did not stop the Air Force from blaming the accident on pilot error.

Likewise, the Air Force and Marines’ finicky V-22s—purchased for $100 million a pop—for years crashed and burned at a rate much higher than the official statistics admit. When a V-22 went down in Afghanistan in 2010, killing four people, the Air Force blamed the crew despite evidence that the tiltrotor’s engines had failed in mid-flight.

And when lead accident investigator Brig. Gen Donald Harvel protested, the flying branch brass mounted a coordinated campaign to discredit and silence him.

The Pentagon seemed to want Americans to believe that its high-tech warplanes rarely malfunctioned. The reality was that crashes and fires were shockingly common, expensive and deadly.

David Axe is defense editor of The National Interest. He is the author of the graphic novels War Fix, War Is Boring, and Machete Squad.