Biden’s Middle East Trip Was About Domestic Politics, Not Peace 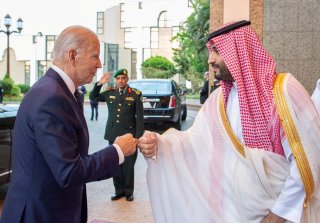 President Joe Biden’s trip to Israel and Saudi Arabia demonstrated how old habits in domestic politics can overwhelm any creative thinking, or any progress at all, regarding U.S. national interests overseas. The trip’s two main purposes concerned the domestic political interests of a president who—largely for reasons beyond his control—is suffering low poll numbers. One purpose was to fulfill what many American politicians consider an electoral requirement, which is to demonstrate love for Israel. The other was to show American consumers that he is trying to do something to lower the price of gasoline, and with that, to ease the larger problem of inflation. Whether or not Biden succeeds in winning any political points, the trip yielded no evident benefit for the national interest and is more likely to have negative consequences.

The gasoline price issue involves the quantity of crude oil that Saudi Arabia produces. After his meetings with the Saudis, Biden was only able to make a vague statement that he expected “further steps” by Saudi Arabia in the “coming weeks” to increase the supply of oil. In fact, there is good reason to expect that any such increase will be minimal, as a matter of Saudi capability as well as of willingness. Saudi leaders have talked a good game about increasing to 12 or even 13 million barrels per day, but observers of the Saudi oil industry have serious doubts. President Mohammed bin Zayed of the United Arab Emirates recently told French president Emmanuel Macron that Saudi Arabia and the UAE already were near the limits of their ability to pump oil. Saudi production currently is at about 10.5 million bpd. The highest the Saudis ever have produced for as much as one month was about 11.5 million bpd.

If Biden really wanted to get more oil onto the world market in a hurry, he would have a better chance to do that not by cajoling the Saudis but instead by returning the United States to compliance with the Joint Comprehensive Plan of Action (JCPOA), the multilateral agreement that restricted the nuclear activity of Iran. This would lift oil sanctions on Iran, which has the fourth-largest petroleum reserves in the world. The Iranians currently are producing about 1.3 million bpd less than they were just before the current sanctions were imposed. They demonstrated how fast they can ramp up production when an earlier round of sanctions was lifted with the signing of the JCPOA, after which Iran increased production by 500,000 barrels per day within four months, and by about a million barrels per day within a year. And that is not to mention some 65 million barrels of oil condensate that Iran has stored in anchored tanker ships, ready to export.

Although Biden said he favors diplomacy in dealing with Iran, his posture during this trip moved away from diplomacy and toward war. In the same interview with Israeli television in which he again refused to consider removing the Islamic Revolutionary Guard Corps from the U.S. list of foreign terrorist organizations even if restoration of the JCPOA depended on it—and even though the IRGC still would be subject to numerous other U.S. sanctions—he expressed a willingness to use military force against Iran. In other words, Biden has been unwilling to do away with a purely symbolic gesture from the previous administration in order to prevent an Iranian nuclear weapon, but he says he is willing to risk a new Middle East war in an effort to do so.

This trip highlighted how much Biden’s Middle East policy has been a continuation of Donald Trump’s, including in what became the main theme of the trip, which was to encourage deepening relations between Israel and the Gulf Arab states. The administration clearly is itching for Saudi Arabia to move to full diplomatic relations with the Israelis during Biden’s term, to score some of the domestic political points that the Trump administration worked so hard to score by pushing some other Arab states into taking that step.

It is obvious why the Israeli government has placed such high priority on normalization; it shows Israel can enjoy cordial relationships with other states in the region despite continuing the occupation of Palestinian territory, the settlement project, and the denial of self-determination to Palestinians. Neither the previous nor the current U.S. administration has ever explained, however, what’s supposedly in it for the United States, or for peace and stability in the Middle East. The upgrading of relations was in no way a “peace agreement”—the Arab states concerned already had cooperative relations with Israel, including even on security matters.

Instead, what has been formed is an anti-Iran military alliance, which is how the Israeli defense minister explicitly describes it. What the Biden administration is promoting and encouraging the Saudis to join more fully and openly is an intensification of conflict in the Persian Gulf region and a move away, not toward, peace and stability.

The upgrading of Israeli relations with those Arab states also perpetuates another Middle East conflict—the one between Israel and the Palestinians. For Israel, part of what the upgrading was all about was to bypass the Palestinians and not make peace with them. Biden’s brief visit to the West Bank and meeting with Mahmoud Abbas—the unpopular octogenarian president of the obsolete structure that is called the Palestinian Authority and is now little more than an auxiliary to Israeli security forces—was a sad reminder of how this U.S. president made it obvious from the beginning of his term that he was not going to spend political capital on trying to bring this conflict any closer to a resolution or the Palestinians any closer to self-determination.

The presidential trip was accompanied by much commentary about how Saudi Arabia is too important not to be engaged, and thus Biden was justified to go back on his earlier statements about making it a “pariah.” Engagement is certainly warranted, but engagement does not equate with a presidential trip. If engagement is important, it is fair to ask why Biden did not bother to nominate an ambassador to Saudi Arabia until just three months ago—a nominee still not confirmed.

Like it or not, a presidential visit gets perceived as a reward to, and recognition of, the leader being visited. Crown Prince Mohammed bin Salman (MBS) basked in having a U.S. president come to him—a president whom MBS snubbed just a few months ago by refusing to take his phone call. The ruler who ordered the killing of Jamal Khashoggi used his meeting with Biden to play upon the administration’s hypocrisy about lethal abuses, given its sweeping under the rug the Israeli killing of Palestinian-American journalist Shireen Abu Akleh.

To the extent this visit affects MBS’s motivations, it won’t be to pump a lot more oil. Instead, it will be to make the Saudi ruler even less likely than he otherwise might be either to correct the serious human rights abuses within the kingdom or to back off from the destabilizing ways he was pursued Saudi regional dominance and the rivalry with Iran, exemplified by the devastating Saudi air war against Yemen.

In his speech at the Jeddah summit, Biden said the United States was not going to leave a “vacuum” in the Middle East to be filled by Russia and China. This statement has the same problem that the “vacuum” metaphor usually has when applied to the intervention of major powers in someone else’s region. It’s not like a gas that pushes out other gas; it’s more likely to elicit counteractions from the other side. The Saudi foreign minister remarked during Biden’s visit that the kingdom’s ties to the United States and China are not mutually exclusive. And the U.S.-promoted activity in the region that is predicated on hostility toward Iran has the unsurprising effect of pushing Iran into closer ties with Russia and China. This process is underscored by Iran’s joining the Shanghai Cooperation Organization and by Russian president Vladimir Putin’s visit to Iran, with timing nearly simultaneous with Biden’s Middle East trip.

In sum, the net result of Biden’s journey is to make the Middle East even more of a conflictual place than it was before. As for great power involvement, there are echoes of how the Middle East was a playing field in the Cold War between the United States and the USSR. A difference is that the line-ups in the game have changed some, with the U.S. side having swapped the dictatorship of the shah of Iran for the dictatorship of Abdel Fattah al-Sisi in Egypt.