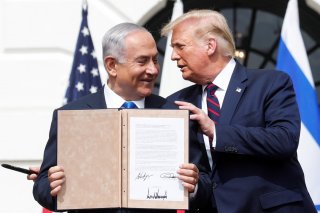 The political careers of President Donald Trump and Israeli prime minister Benjamin Netanyahu have become increasingly linked. The linkage goes well beyond the parallel personal interests they have in such things as the hyping of recent diplomatic developments involving Bahrain and the United Arab Emirates. It extends to a similarity of political methods that over the long term works to the detriment of both Americans and Israelis.

The spectacle this week of a White House signing ceremony replete with flags and trumpet flourishes helps both leaders claim credit with their domestic audiences for what they say is a historic “peace deal,” even though it isn’t. An ideal Middle East would be one in which all states of the region, including Israel, have full and cordial relations with all other states of the region, but only because in an ideal Middle East such relations would reflect the successful resolution of previous conflicts. Relations that ignore or paper over unresolved conflicts, much less exacerbate them, are not an improvement.

The upgrading of Israel’s existing relationships with Manama and Abu Dhabi is not a peace deal—neither Bahrain nor the UAE had been at war with Israel—but instead a deepening of an anti-Iran military alliance that intensifies confrontation in the Persian Gulf and risks stimulating an arms race there. Israel’s conflict with the Palestinians, which has been the reason for a lack of full diplomatic relations with Arab states, is left unresolved and even less likely than before to be resolved, given how this latest development reduces further any Israeli incentive to resolve it. Or in the blunter and more partial language of an Arab leader—in this case, the prime minister of Morocco—normalization with Israel “emboldens it to go further in breaching the rights of the Palestinian people.”

It is hard to see any benefit for U.S. interests—as distinct from the political interests of Donald Trump—in this. In Israel, normalization of relations with the two Gulf states will be welcomed by a wider range of Israelis than Netanyahu’s core base of support. But thoughtful Israelis will realize that this development perpetuates Israel’s living by the sword and keeps it as far away as ever from true peace.

The Trump/Netanyahu partnership operates within a larger transnational alliance between the Republican and Likud parties. Interference by one country in the internal political affairs of the other has become central to that alliance. Americans ought to worry about how such interference erodes their democracy, whether the interference comes from Russia or, in a longstanding and more blatant way, from Israel. Israelis should worry, too, not only about what happens to U.S.-Israeli relations when the Likud-allied party is not in power in Washington but also about how much their own country’s politics are influenced by the domestic politics of the United States.

Some of the resemblances between Trump and Netanyahu have to do with this larger party alliance and some are more personal to the two men. Corruption falls mostly in the latter category. The corruption for which Netanyahu has been charged is serious but probably no more so than that of Trump, who has thrown government ethics out the window and sees no apparent division between his personal equities and official actions. At the presidential level, this has included, among much else, drumming up business for Trump’s hotels and golf courses. The example set at the top has encouraged similar rot throughout the political levels of the executive branch.

Trump and Netanyahu display in common certain techniques to fight off disclosures that they don’t like. In Trump’s case, this has involved enormous effort, with Barr’s help, to discredit investigations that uncovered Russia’s role in helping to get Trump elected. The effort has involved investigating the investigators, no matter how misdirected such an effort to discredit may be, coupled with accusations of improper political motives on the part of government professionals who addressed the original problem.

Netanyahu, taking a page from the same book, is saying the same thing about investigations into his corruption. “The police and prosecution are making political decisions against justice and law in order to topple a right-wing prime minister,” declared Netanyahu. “This conduct must be investigated.”

Both Trump and Netanyahu base their political power on energizing only a slice of the people they rule while writing off the rest of their subjects. With Netanyahu, the written-off segment includes not only what remains of the Israeli left but also, of course, the entire Palestinian Arab population that is subject to Israeli rule but enjoys no Israeli political rights.

Trump does not have the option of consigning Democrats, immigrants, or other segments of the American public he would like to write off to an equivalent of the West Bank occupation. But his rhetoric is centered on a divisive strategy to excite the 35 or 40 percent of the electorate that can be described as his base while finding ways to manipulate this minority support into continued power in a political system that is supposed to be based largely on the majority rule. Those ways include longstanding Republican voter suppression measures and, more recently, Trump’s efforts to delegitimize in advance, with unsubstantiated claims of fraud, many of the ballots that will be cast against him in this fall’s election.

What the United States and Israel Do and Do Not Share

This last similarity between the two leaders leads to an irony involving common tropes about the U.S.-Israeli relationship. It has often been said that this relationship is based on shared democratic values. But insofar as Israel rules a large subjugated population without political rights it is not democratic. Now Trump, with his assault on America’s democratic procedures as represented in the coming election, is closing the gap with Israel—but in a direction contrary to, not in line with, democratic values.

The two governments say something similar about those values in their dealings with authoritarian regimes, including Persian Gulf monarchies of the sort represented at this week’s affair at the White House. The Trump administration’s dealings have involved playing down the Saudi regime’s grotesque murder in a diplomatic mission of a Saudi dissident journalist who was a U.S. resident. Israel’s dealings have included the selling of cell phone spyware that the UAE and other Persian Gulf regimes use to monitor dissidents.

Another major flaw in the traditional notion of U.S.-Israeli common values concerns religion. Israel is a theocracy in which certain rights, including the right to self-determination, are reserved by law for Jews alone and in which religion shapes official matters on subjects ranging from marriage to military service obligations. By contrast, the United States was founded on a separation of church and state and an explicit rejection of established religion. Trump’s administration has narrowed this gap as well. The favors he has bestowed on Netanyahu’s government, such as moving the U.S. embassy to Jerusalem, he says he did “for the evangelicals.” Religious dogma of one segment of the minority that constitutes Trump’s political base is shaping large parts of U.S. policy toward the Middle East.

Partners in so much else, Netanyahu and Trump are increasingly partners in global isolation, notwithstanding how much some arms-for-recognition deals with Gulf Arab monarchies may obscure that isolation for a moment. In addition to many United Nations resolutions and U.S. vetoes through the years about the Palestinian conflict, there now is isolation on, for example, policy toward Iran and the handling of war crimes.

The Trump and Netanyahu governments are even partners in isolation regarding the coronavirus pandemic, which a surging caseload has made into a political liability for Netanyahu as it is for Trump. Last week the United Nations General Assembly passed a broad-ranging resolution about the pandemic by a vote of 169-2, with Hungary and Ukraine abstaining and the United States and Israel voting no. (The Trump administration did not like what the resolution says about sanctions, women’s reproductive rights, and the World Health Organization.)

It seems that the closer Trump and Netanyahu draw together, the farther away they are leading their countries from the opinions and respect of most of the rest of the world.