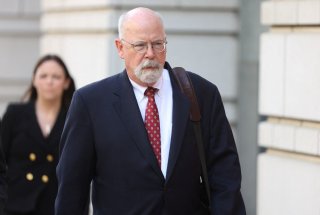 The unsuccessful prosecution of Washington lawyer Michael Sussman, whom a federal jury acquitted this week on a charge of lying to the FBI, directly proves almost nothing of significance but is related to at least three baleful things at the intersection of current politics and criminal justice. One is the persistence and falsity of the myth of a “deep state” that supposedly runs amok as it substitutes its political preferences for those of elected officials. A second is the pernicious use of investigations not in a genuine search for truth or to uncover wrongdoing but instead as a distraction from stories that someone wants buried—in this case, the story of Russian interference in a U.S. election. A third is a variation on Parkinson’s Law, in which prosecutions expand to fill the prosecution resources that have been made available.

It would be difficult to understate the issue at the center of Sussman’s trial. It had nothing to do with the substance of the accusation that Sussman brought to the FBI’s attention, or to any larger matters related to such accusations. The issue instead was whether Sussman—who had been working for multiple clients, including Hillary Clinton’s presidential campaign—misled the Bureau by indicating that he was acting on his own behalf when coming forward with his tip (which had to do with an abstruse discovery by cybersecurity researchers suggesting a possible connection between Donald Trump’s business and a bank with ties to the Kremlin).

Whether or any such misleading occurred had no apparent effect on the FBI’s response to Sussman’s information and certainly had nothing to do with the Bureau’s investigation of the Russian election interference and possible connections to Trump’s campaign. The FBI responded as it is supposed to respond when offered any such information. It briefly looked into what Sussman had brought to its attention before dismissing the matter as lacking substance and not worthy of further inquiry. If Sussman’s association with the Clinton campaign were to have any effect on the Bureau’s response, the FBI already was well aware of that association, whether or not Sussman mentioned it when he visited.

The FBI receives tips all the time from people with possible ulterior motives—commercial, political, romantic, or otherwise. FBI agents are not neophytes in dealing with such motivations and any possible implications regarding the validity of information that is offered. For them, Sussman coming in with his tip was another day at the office.

As for any possible involvement by the Clinton campaign, the defense in this trial introduced testimony not only that the campaign had not asked Sussman to go to the FBI but that it did not want him to do so. If the campaign were going to get any political mileage out of the accusation about the bank connection, it hoped to get it from stories in the press. Going to law enforcement would only slow that process, and in fact the FBI official to whom Sussman talked asked a New York Times reporter who was working on the topic not to publish anything until after the Bureau had a chance to look at it.

All this minutia is far removed from the original motivation for Trump’s attorney general, William Barr, to establish three years ago under U.S. Attorney John Durham the special counsel’s office that prosecuted Sussman. Barr’s move was part a larger effort, led by Trump himself, to deny—or failing that, to divert attention from—Russia’s interference in the 2016 presidential election in support of Trump. Durham’s assignment was to look into any wrongdoing by U.S. intelligence, counterintelligence, and law enforcement components insofar as those components investigated the Russian election interference and its relationship with Trump’s campaign. The implied subtext was that the story of the Russians, Trump, and the election was not based on fact but instead was a put-up job by “deep-state” officials who were politically motivated to get at Trump.

It no doubt is disappointing to those following the Trump/Barr line that Durham’s work has produced a dry hole. No politically motivated witch hunt has been found. The sole government official Durham has indicted was an FBI lawyer whose offense was to add three words to an email that was part of an application for surveillance submitted to a court—words that were truthful and were highly unlikely to have affected either the FBI’s application or the court’s determination. The only other person Durham has indicted is, like Sussman, not a government official but a private individual accused of being untruthful in an FBI interview. And this one isn’t even a U.S. citizen but instead a Russian resident in the United States.

No matter how the jury had decided in Sussman’s trial, it would have proved nothing about the nature of any FBI investigations, let alone about the substance of what the FBI was investigating. It would have been a statement only about whether one lawyer with multiple clients was having trouble keeping his billable hours straight.

Durham and his staff deserve sympathy for facing a dry hole in their assignment and having to come up with something to justify the ample time and prosecutorial resources their office has consumed. The Sussman case was a scraping of the bottom of the barrel with regard both to the trivial nature of the alleged offense and the weakness of the case supporting the allegation. The testimony of the sole FBI official who had heard Sussman’s alleged untruth was undermined by the same official having earlier given different accounts of his meeting with Sussman.

And no matter the verdict in Sussman’s trial, it would not have negated the substantial basis for the FBI to investigate the election interference issue. The Russian interference on behalf of Trump’s election has been extensively documented in reports by the intelligence community, special counsel Robert Mueller, and the Senate Select Committee on Intelligence. As for the role that Trump and his campaign played, Trump himself openly urged Russia to hack into his opponent’s email, something that the Russians in fact did a few days later. The Trump campaign and members of the Trump family replayed material created by the Russian trolls who were Moscow’s main cyber instrument for interference in the election campaign. The Trump campaign chairman repeatedly met and shared polling data with a Russian intelligence agent. Senior members of the Trump campaign and family met in Trump Tower with Russians known to have ties to the Russian regime, for the purpose of receiving dirt on Hillary Clinton. And as Mueller documented in the second volume of his report, Trump repeatedly obstructed investigation of the Russian interference.

In short, Trump and his circle invited, facilitated, exploited, and provided cover for the Russian interference in a U.S. election. Instead of doing the only proper thing when becoming aware of a foreign influence attempt, which is to report the attempt to the proper authorities—as other political campaigns have done—the Trump people welcomed the foreign meddling. Or as Donald Trump Jr. put it in reacting to the prospect of getting dirt on Clinton from the Russians, “I love it.”

If alleged political motivations for an ostensible criminal investigation are to be the subject of another investigation, then the appropriate response now would be an investigation of Durham’s investigation of the FBI’s investigation. What Barr did in establishing the Durham inquiry had more obvious political motivation, and less hope of finding significant wrongdoing, than what the FBI did in looking in the election interference matter. There is no indication, however, that Durham and his staff have done anything illegal or unethical. Despite the waste of resources their operation represents, it thus probably is best to do as Attorney General Merrick Garland evidently has decided, which is to let Durham’s office eventually die a natural death.