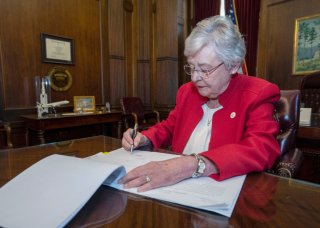 The expanded child tax credit may have expired at the federal level, but some states are pursuing legislation for new tax breaks and tax credits of their own. One piece of tax credit legislation was just signed into law in one of the reddest states in the country.

According to WTVM, Gov. Kay Ivey of Alabama has signed House Bill 231, which will deliver aid to families who received the child tax credit.

“I’m proud to sign HB231 into law so that money will return directly into the hands of hardworking Alabamians. I commend the AL Legislature for their work on this & look forward to this benefitting AL families this tax season,” Governor Ivey wrote after signing the bill.

Ivey’s office, per the news report, says the new law will save families in the state tens of millions of dollars.

The new law goes into effect for the tax year that ended in 2021. According to the announcement from the governor’s office, the new law “allows individual taxpayers to calculate their federal income tax deduction without consideration of certain items allowed under the American Rescue Plan Act.”

The Alabama Department of Revenue also released a fact page explaining how the new law will work for the state’s residents.

What About the Federal Credit?

The federal child tax credit expired in December when the Build Back Better legislative package failed to pass the Senate. While Build Back Better and the one-year child tax credit extension it would have funded may be stalled, there have still been efforts by some in the Senate to revive the credit. Many lawmakers are citing a recent study by the Center on Poverty and Social Policy which found that 3.7 million more children were in poverty in January, the first month after the credit expired. However, it is not clear if the child tax credit has a path to revival in Congress.

In an interview with Yahoo Finance this week, economist Joe Brusuelas called a revival of the child tax credit a “good idea.”

“So when we took a look at that, what we saw was this was a program that was actually utilized to buy necessities, not necessarily luxuries. And this is what you want to see during times of stress,” he added. “I think that is a proven way to provide direct relief, targeted households that need them, those with children who then, in turn, spend it on food, fuel, clothing, and shelter.”