Andrew Yang Has Ditched the Democrats. Can His ‘Forward Party’ Take Off? 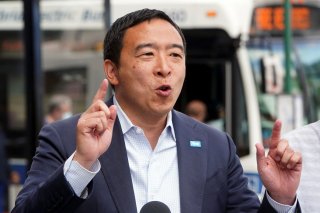 Former presidential candidate and New York City mayoral contender Andrew Yang announced on Monday that he had left the Democratic Party to promote the “Forward Party,” an independent political movement.

In a blog post explaining his decision, Yang underlined that he had been a Democrat for most of his life, and had actively campaigned for Democratic candidates before and after the 2020 election. However, he criticized the two-party system for leading to extreme partisan polarization, committing his prospective movement to combat it through electoral reforms.

“My goal is to do as much as I can to advance our society,” Yang wrote. “There are phenomenal public servants doing great work every day—but our system is stuck [...] because polarization is getting worse than ever.”

“Now that I’m not a member of one party or another,” he continued, “I feel like I can be even more honest about both the system and the people in it.”

Yang highlighted open primaries and ranked-choice voting as two reforms that could encourage moderation and open discourse, arguing that closed primaries and single-vote systems encouraged candidates to be loyal to an extreme base that failed to represent most voters' preferences.

Reception to Yang’s announcement was largely mixed, however, with some commentators suggesting that blame for the country’s political crisis lay with the Republicans rather than the Democrats.

“[The] American experiment is under siege,” MSNBC host Malcolm Nance wrote in response to Yang’s announcement. “Liberal govs are falling globally to fascism. Racism abounds. World is literally burning. What’s your genius idea? Start #ForwardParty to peel votes off [from] the only party trying to SAVE IT ALL.”

Yang, an influential dark horse candidate in the 2020 Democratic primary, has been widely credited with introducing the concept of universal basic income, or UBI, to public discourse, and received attention during the race due to his unorthodox proposal to give all adult Americans $1,000 per month. However, after poor showings in Iowa and New Hampshire, he suspended his campaign, endorsing and campaigning for eventual winner Joe Biden.

Following his presidential run, Yang initially accepted a position as a commentator on CNN, before running to succeed Bill de Blasio as Mayor of New York. Despite a commanding early lead, a number of gaffes in his campaign led to a fourth-place finish, behind Kathryn Garcia, Maya Wiley, and eventual nominee Eric Adams.

In a later op-ed for the New York Post, Yang addressed what he viewed as shortcomings within New York’s electoral system, including its practice of the two parties holding closed primary elections, which he noted meant that the Democratic candidate was chosen by only eleven percent of the city’s residents.