Are Sky-High Mortgage Rates About to Start Falling? 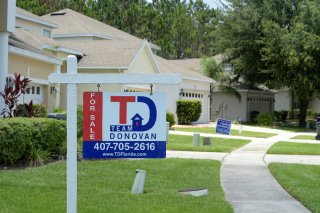 After months of surging home prices, those who are still trying to navigate the cutthroat housing market might see some much-needed relief soon.

According to Mortgage News Daily, the average rate on the popular thirty-year fixed mortgage surpassed the psychologically important 5 percent level earlier this week. This, in addition to a rising number of new listings, may be helping to cool off the red-hot housing market ever so slightly.

“Prices, however, are still well above year-ago levels,” CNBC real estate correspondent Diana Olick writes. “Higher mortgage rates are also making houses less affordable. The average borrower is now paying about 38 percent more than they would have for the same home a year ago on a monthly payment. For some buyers, general inflation and related mortgage rate hikes mean less budget flexibility to pursue freshly-listed homes. For those who can afford to persist, a silver lining could be relatively less competition for more for sale home options, which could lead to some relief from relentless home price momentum.”

According to Redfin, approximately 12 percent of homes for sale saw a drop in price during the four weeks ending on April 3. That figure is up from 9 percent a year ago.

“Price drops are still rare, but the fact that they are becoming more frequent is one clear sign that the housing market is cooling,” Daryl Fairweather, Redfin’s chief economist, said in a statement. “It goes to show that there’s a limit to sellers’ power. There is still way more demand than supply, and buyers are still sweating, but sellers can no longer overprice their home and still expect buyers to clamor at their door.”

Potential homebuyers, though, still must contend with rising rates that will impact how much they can spend on a house. Some are rushing in to make a purchase before the rates climb even higher.

“Rates have been rising rapidly in 2022 in general as the market quickly repositions for a big shift in Fed policy,” wrote Matthew Graham, chief operating officer at Mortgage News Daily. “The Fed sets short term rates and buys longer term bonds. Both actions impact rates across the board. In the past six months, the Fed simultaneously indicated it would need to hike rates faster and reduce its bond purchases much more aggressively than the last time it shed bonds from its balance sheet in 2017-2019.”

On Thursday, St. Louis Fed president James Bullard acknowledged that the Federal Reserve still needs to raise interest rates substantially to control inflation that has hit a four-decade high. He said that a rules-based approach suggests that the central bank needs to hike its benchmark short-term borrowing rate to roughly 3.5 percent.

“If you take account of (forward guidance), we don’t look so bad. Not all hope is lost. That is the basic gist of this story,” Bullard said in a speech at the University of Missouri. “You’re still behind the curve, but not as much as it looks like.”