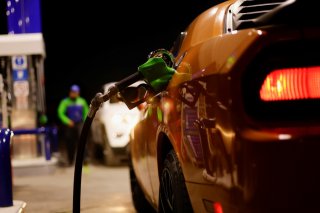 In an effort to tame California’s highest-in-the-nation gas prices, Governor Gavin Newsom unveiled a proposal in March that would give every vehicle owner in the state a $400 tax refund in the form of a debit card.

But, much to the dismay of hard-hit drivers, it could take several more months for Californians to see those gas rebate checks. According to a new report from the Bay Area News Group, per Fox 11 in Los Angeles, Newsom is expecting that the rebate checks will be sent out in about five months.

In the report, Newsom placed some of the blame on the state’s Democratic leadership for “outlining a plan that would funnel $8 billion through the Franchise Tax Board, when he said could add months to the refund timeline.” Additionally, the Governor and California’s Democratic leaders still have not come to an agreement on whether the money should go to residents regardless of income levels—which Newsom favors—or should be targeted toward only lower-income residents.

First announced on Twitter, the gas rebate is part of an $11 billion package that aims to help residents deal with fast-rising prices at the pump, which have surged to a statewide average of $5.84 per gallon, according to data from AAA. The refunds would include $400 for each registered vehicle—up to two—that a person owns. This means that residents could potentially receive up to $800 in total from the state to help offset high gas prices. “That direct relief will address the issue that we all are struggling to address, and that’s the issue of gas prices,” Newsom said in the Twitter video. “Not only here in our state, but of course, all across this country.”

Furthermore, Newsom’s office has also proposed offering sizeable grants—up to $750 million—to make public transit free to the public for up to three months.“We’re taking immediate action to get money directly into the pockets of Californians who are facing higher gas prices as a direct result of [Russian President Vladimir] Putin’s invasion of Ukraine,” Newsom said in a statement. “But this package is also focused on protecting people from volatile gas prices, and advancing clean transportation—providing three months of free public transportation, fast-tracking electric vehicle incentives and charging stations, and new funding for local biking and walking projects,” he continued.

Just this past week, as reported by Forbes, about 73,000 payments from the Golden State Stimulus program are heading out to eligible residents, with the majority of them being issued via traditional mail. The news outlet noted that “California will send 8.5 million payments total, with two out of every three Californians being eligible.”

Eligible taxpayers—who make up to $75,000 for the 2020 tax year in the state—will be in line to receive a one-time payment of $600. Qualifying individuals with ITINs (Individual Taxpayer Identification Numbers)—generally immigrants and undocumented workers—will receive an additional $600, and taxpayers with dependents will get an additional $500.