Gas Prices Headed For Another Surge in May 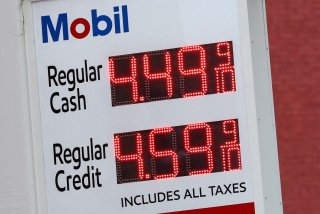 While gas prices in the U.S. were dropping in late March and early April, they have begun another surge, rising for the last two weeks.

According to GasBuddy, the average gas price in the United States have risen 6.9 cents in the last week, reaching $4.17 per gallon. The price is down by a cent from a month earlier and is up $1.29 per gallon from this time a year ago.

This time, diesel prices have risen, which may very well lead to rising prices in the sort of goods transported by trucks. “Gasoline prices have continued their rally in the last week with oil prices sustaining higher levels, but the real story has been diesel fuel, which has skyrocketed to its highest level ever seen. Diesel is now $1 per gallon or more in many areas compared to gasoline,” Patrick De Haan, head of petroleum analysis at GasBuddy, said in a blog post this week.

Oil prices have also risen “sharply,” per the site.

“The meteoric rise in diesel prices is likely to continue for the first half of the week at least, while gasoline prices could continue to see a slow but steady rise. For now, the rising cost of diesel will surely be felt in the grocery store, hardware store, or on your next flight as jet fuel prices accelerate, leading to a continued rise in inflation likely to ripple across the economy.”

AAA also reported that gas prices have risen, attributing the rise to “the high cost of crude oil.” AAA added that total domestic gasoline stocks have decreased, while gasoline demand has also decreased.

“As long as the supply remains tight, it will be hard for crude oil prices to fall and consumers will, in turn, face higher prices at the pump,” Andrew Gross, AAA spokesperson, said in the release. “It now costs drivers in the U.S. about $23 more to fill up than a year ago.” The increase was largest in Delaware, where it went up by 22 cents in the last week, while they went up 21 cents in Maryland and 15 cents in Pennsylvania.

According to a new Gallup poll, about half of Americans say that “recent gas price increases have caused hardship for their family.” However, that number is lower than where it was in recent months, which “may reflect that Americans expect those changes to be temporary rather than permanent.”

“Fifty-two percent of Americans say recent prices increases in gasoline have caused financial hardship for their household. Gallup asked this question in the past when gas prices were rising,” the polling firm said. “Significantly more Americans said they were being financially harmed by increasing gas prices in 2005, 2008 and 2011 than say that now. The high points were 72 percent in September 2005 and 71 percent in May 2008.”