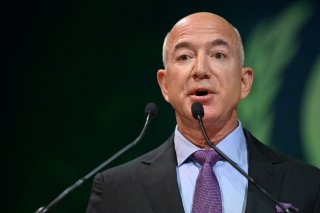 Amazon founder Jeff Bezos took to Twitter over the weekend to criticize the Biden administration’s approach to taming inflation and asserted that the current economic environment is most harmful to the nation’s poor.

“In fact, the administration tried hard to inject even more stimulus into an already over-heated, inflationary economy and only [U.S. senator Joe] Manchin saved them from themselves,” Bezos wrote on Twitter.

“Inflation is a regressive tax that most hurts the least affluent. Misdirection doesn’t help the country,” he continued.

Manchin (D-WV) often has been accused of standing in the way of key aspects of the Biden administration’s agenda, such as the Build Back Better legislation.

Bezos’ statement accompanied a retweet of a tweet by the Neoliberal Project that contended that the United States’ deficit “is decreasing because we're not doing pandemic aid anymore, and federal receipts are up because of inflation. Congress, or the Biden administration, didn't do anything to lower the deficit.”

On Friday, Bezos called out President Joe Biden over a tweet that said taxing wealthy corporations can help lower inflation.

“Raising corp taxes is fine to discuss. Taming inflation is critical to discuss. Mushing them together is just misdirection,” he wrote, adding that the newly created Disinformation Board should review the president’s tweet.

The tweets from both Biden and Bezos come as inflation has surged to a four-decade high and the Federal Reserve is scrambling to hike interest rates to blunt further price increases.

Bernanke noted that he has a good idea why the Jerome Powell-led Fed waited to take action.

“One of the reasons was that they wanted not to shock the market,” he said.

“Jay Powell was on my board during the Taper Tantrum in 2013, which was a very unpleasant experience. He wanted to avoid that kind of thing by giving people as much warning as possible. And so that gradualism was one of several reasons why the Fed didn’t respond more quickly to the inflationary pressure in the middle of 2021,” he continued.

Bernanke concluded by saying that “there’s a lot of support for the fact that the Fed is tightening now, even though obviously we see the effects in markets.”