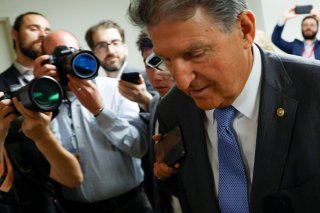 The Build Back Better Act, President Joe Biden’s roughly $1.75 trillion reconciliation bill, appears to be headed for defeat after Sen. Joe Manchin (D-W.Va.) indicated that he would not support it, depriving it of a majority in the evenly divided Senate.

“I cannot vote to continue with this piece of legislation. I just can’t,” Manchin told Fox News on Sunday before outlining concerns over inflation, gas prices, and the national debt in a longer statement posted to his Senate website. In the statement, he indicated that the Democratic majority in Congress was “determined to dramatically reshape our society in a way that leaves our country even more vulnerable to the threats we face.”

In the aftermath of Manchin’s decision, White House Press Secretary Jen Psaki excoriated the senator for an apparent breach of trust with President Joe Biden, to whom he had reportedly indicated support for the bill earlier in the week.

“Senator Manchin committed to the President, at his home in Wilmington, to support the Build Back Better framework that the President then subsequently announced. Senator Manchin pledged repeatedly to negotiate on finalizing that framework ‘in good faith,’” Psaki said in a press statement.

“Just as Senator Manchin reversed his position on Build Back Better this morning, we will continue to press him to see if he will reverse his position yet again, to honor his prior commitments and be true to his word,” according to the statement.

As the critical swing vote on the Build Back Better legislation, Biden and Senate leaders have repeatedly reshaped the bill in accordance with Manchin’s requests, including cutting its funding in half from its previous level of $3.5 trillion.

However, in the days prior to his decision, Manchin opted not to support the increased Child Tax Credit, which would provide American families with up to $3,600 per child per year, a substantial increase over the previous level of $2,000. The West Virginia senator claimed that this increase represented an unacceptable expansion of the federal deficit, which he characterized as a threat to U.S. national security.

However, progressives were quick to note that Manchin voted in favor of the expanded $777 billion omnibus defense bill earlier in the week, with Rep. Ilhan Omar (D-Minn.) describing the senator’s explanation as “bulls**t.”

“When a handful of us in the House warned this would happen if Dem leaders gave Manchin everything he wanted 1st by moving [the infrastructure bill] before BBB instead of passing together, many ridiculed our position,” Rep. Alexandria Ocasio-Cortez (D-N.Y.). said in a social media post on Twitter. “Maybe they’ll believe us next time.”