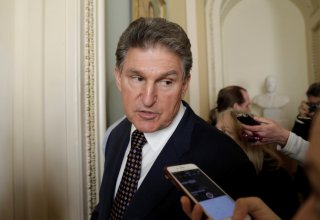 As negotiations continue over the formerly-$3.5 trillion infrastructure bill pushed by President Joe Biden and Senate Majority Leader Chuck Schumer (D-NY), two of the highest-profile voices on either side—Senator Bernie Sanders (I-VT) and Senator Joe Manchin (D-WV)—have publicly engaged in a war of words over the bill’s scope and intent.

After Sanders published an opinion piece in the Charleston Gazette-Mail, Manchin’s local newspaper, calling for his support for the bill, Manchin fired back with a statement condemning Sanders: “This isn’t the first time an out-of-stater has tried to tell West Virginians what is best for them despite having no relationship to our state.”

Manchin clarified that he was opposed to the enormous scope of the funding, suggesting that he would not support a “reckless expansion of government programs.”

“No op-ed from a self-declared Independent socialist is going to change that,” the senator added, a dig at Sanders’s position as an independent rather than a Democrat.

Sanders, best known for his two highly influential presidential campaigns in 2016 and 2020, has emerged as one of the strongest voices in favor of the full $3.5 trillion spending proposal, publicly defending it wherever possible (even Fox News). In his article for the Gazette-Mail, he described the proposals included in the $3.5 trillion bill, including Medicare expansion and reforms to drug prices, would aid West Virginia, one of the poorest states in the country and an epicenter of the opioid epidemic. He also highlighted other parts of the bill, including environmental action and child care, that could face the axe if Manchin were successful in reducing the bill’s scope.

While much of the piece was devoted to substance, Sanders tacitly criticized Sens. Manchin and Krysten Sinema (D-AZ) for their opposition, noting that the other forty-wight Democrats in the Senate had voiced their support for the bill.

“Poll after poll,” Sanders’ op-ed read, “shows overwhelming support for this legislation. Yet, the political problem we face is that in a 50-50 Senate we need every Democratic senator to vote ‘yes.’ We now have only 48. Two Democratic senators remain in opposition, including Sen. Joe Manchin.”

Manchin has supported a $1.5 trillion spending plan, viewing it as a budget-conscious alternative to the $3.5 trillion proposal. However, Sanders’s original plan called for $6 trillion; the $3.5 trillion figure was arrived at after consultations with Sen. Mark Warner (D-VA), a moderate Democrat.