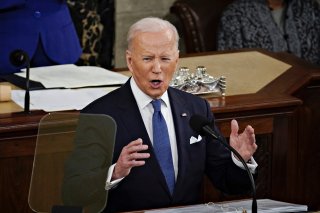 President Joseph Biden delivered his first official State of the Union address Tuesday night. He spent large sections talking about the situation in Russia and Ukraine, as well as the state of the COVID-19 pandemic, the economy, and fears of rising crime.

As promised earlier in the week, Biden laid out the path forward for his legislative agenda, no longer using the “Build Back Better” slogan after that package died in the Senate this past December. The impression had by many was that the White House was giving up on the idea of extending the expanded child tax credit, which was a key part of the Build Back Better framework.

The president did mention the child tax credit in the State of the Union address, but only briefly, and as part of a list of past Democratic policy proposals that seem unlikely to make it into law this year.

“Let’s pass the Paycheck Fairness Act and paid leave,” Biden said during the speech. “Raise the minimum wage to $15 an hour and extend the Child Tax Credit, so no one has to raise a family in poverty… And let’s pass the PRO Act when a majority of workers want to form a union—they shouldn’t be stopped.”

Trouble After the Expiration

Last week, a report from Columbia University’s Center on Poverty & Social Policy found that child poverty increased significantly in January, the first month after the child tax credit expired. Now, another report says that more families had trouble meeting expenses that month, likely for that reason.

A new Census report found an increase in families that had a difficult time in January. “The HPS asked respondents how difficult it was to cover usual household expenses during the prior week. For this story, households with children are considered to have trouble making ends meet if they reported that it was ‘somewhat’ or ‘very difficult” to cover expenses,” the report said. “During the months CTC payments were distributed, about 30% of households with children reported difficulty meeting expenses.”

This week, CNBC looked at the state of play in Congress when it comes to the extended credit. Sen. Mitt Romney (R-UT) has proposed a child allowance that could form the basis of a bipartisan compromise with Democrats who were hoping to continue the credit.