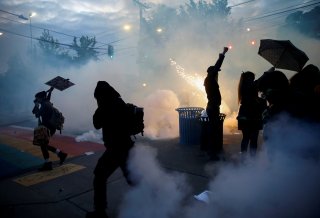 The largest telecommunications and media union in America has joined a lawsuit aiming to ban police from using riot control tactics against journalists in Minneapolis.

Minneapolis riot police have been accused of targeting journalists during protests around the police killing of George Floyd, which have since spread nationwide. The American Civil Liberties Union and reporter Jared Goyette are now suing for a court order that would establish formal protections for reporters during civil unrest.

The Communications Workers of America joined the lawsuit in a Monday filing, throwing the weight of its nearly 700,000-strong membership behind the ACLU’s push.

“NewsGuild-CWA members have been targeted by the recent police violence in Minneapolis. Members have had their speech chilled,” the union wrote in a filing. “And Members have been assaulted and injured by both Minneapolis Police and the Minnesota State Patrol, and been subjected to other unconstitutional conduct by those agencies and their principals.”

NewsGuild is the CWA’s affiliate union for journalists.

Attorneys for the government used the union’s involvement to argue that the ACLU and Goyette had no grounds for a class-action suit that would cover all reporters in Minneapolis.

“Unions don’t need the special vehicle for aggregating claims of a class action. A union can just sue on its own representing its members,” said Liz Kramer, an attorney for the state of Minnesota, at a Monday hearing.

The ACLU’s lawsuit asks for a court order that would protect people who have “identified themselves as a member of the news media” or are clearly “engaged in news gathering activities.”

The order would ban tear gas, rubber bullets, batons, or “threatening language or gestures to harass or intimidate.”

Goyette alleges that riot police fired rubber bullets at his face, and the ACLU used the incident to claim that there has been a pattern of harassing journalists.

“Police doubled down on the violent tactics that ignited the protests, and directed them at the media,” Goyette's attorney Dulce Foster argued. “We have evidence of reporters being attacked when they were actively accommodating the police.”

She pointed to the case of Omar Jimenez, a CNN reporter arrested during a live broadcast. Gov. Gretchen Whitmer has since apologized.

The city of Minneapolis rejected the allegations at Monday’s hearings.

“I will not defend every single instance that has been alleged here,” said city attorney Heather Passe Robertson, but there is no evidence “that it is a custom and practice because it happened over the course of five very intense days.”

“Officers are dealing with an unprecedented amount of civil unrest,” she added. “It is an unrealistic expectation that officers in the midst of this would be disciplined.”

Judge Wilhelmina M. Wright has not yet ruled on the proposed order, but advocates against heavy-handed crowd control tactics won another victory last week when a federal court barred Denver police from using tear gas.

“Those videos show that the officers had ample time for reflection and were not dealing with dangerous conditions,” Judge Brooke Jackson wrote. “Named plaintiffs were attacked with rubber bullets, tear gas, etc, allegedly solely on the basis of their presence at the demonstrations, their viewpoint, or their attempts to render treatment to injured protestors.”