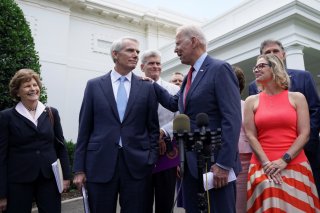 The Biden Administration’s plans for infrastructure legislation are proceeding along two tracks: one that is meant to be passed with bipartisan support, and another that is meant to pass using the reconciliation process, with the votes of Democrats only.

The current frameworks of both are being paid for with varying funding sources. But the bipartisan bill appears to have lost one of the main planned funding mechanisms, at least if one major Republican Senator has his way.

Politico reported this week, citing comments on CNN, that Republican Sen. Rob Portman of Ohio, who is part of the bipartisan talks, is saying that stepped-up IRS enforcement is “off the table” in continuing talks as for how to pay for infrastructure.

That proposal to use IRS enforcement, per the GOP senator’s comments, “faced pushback from Republican colleagues.”

“That's one reason we're having initial meetings today and had more meetings over the past few days on this topic. There are other ways to do this. There’s legislation, one called the Medicare Rebate Rule that provides significant revenue,” Portman said during an appearance on CNN’s “State of the Union” talk show Sunday. “I've been on the phone a lot with the Congressional Budget Office and with the Joint Committee on Taxation over the weekend. And we have a number of pay-fors. And that’s important that it be paid for.”

The bipartisan deal is expected to cost $1.2 trillion, with the Democrats-only deal more expensive, at $3.5 trillion. That latter figure was agreed to by Democrats on the Senate Budget Committee, although it’s not clear yet if it has enough votes to pass the full Senate.

Portman also said on CNN that the Democrats have proposed added IRS enforcement in the reconciliation bill.

The original deal proposed stepping up the IRS enforcement budget by $40 billion, in order to track down delinquent taxes. But other Republicans have pushed back hard on that proposal.

The talks among the Senators are continuing, with twenty-two senators, eleven from each party, taking part in the negotiations.

“We are still negotiating. In fact, last night I was negotiating some of the final details with the White House and later today we'll be having additional negotiations with the Republicans and Democrats who come together to put this bill into a track that's very unusual for Washington,” Portman said.

It’s not clear what the exact timetable is for the two infrastructure bills, but the Biden Administration is hoping to pass both this year.

Portman has announced plans to retire from the Senate at the end of his term, leaving a contested open Senate seat in Ohio for the 2022 midterm elections.