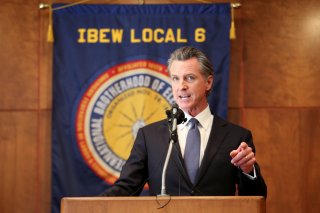 Millions of American motorists are still coming to terms with the fact that the national average for a gallon of regular gas is over $4.00

But if one really wants to see sky-high prices at the pump, California stands alone at the top, with gas coming in at $6.17 per gallon for premium fuel and $5.82 for regular. According to Fox Business, Matt Shupe of Walnut Creek, California, recently made a stop at a remote gas station in Big Sur, California. Before heading inside to buy snacks, he took a quick glance at the gas prices: $9.79 for a gallon of premium gas.

“Still blown away by these nearly $10 (per) gallon insane gas prices,” he wrote on Instagram.

“I've been going out of my way to find Costco gas stations along the route because the gas prices have been so insane,” Shupe told Fox, adding that filling up at Costco has saved him $10 or $20 a tank.

“I'm overlooking Brentwood in Beverly Hills right now. You know, these people in $10-$15 million dollar mansions as their third home aren't worried about a 50-60 percent increase in gas prices, but for the 38 million Californians that don't live like that—this absolutely affects them on an everyday basis. They have to cut corners and clip coupons,” he continued.

However, major financial help is likely on the way for millions of drivers in California. Every California resident with a registered vehicle will automatically get a one-time debit card for $400 per car, up to two vehicles. That means that eligible individuals could potentially receive up to $800 in total from the state to help offset soaring gas prices.

“That direct relief will address the issue that we all are struggling to address, and that’s the issue of gas prices,” Gov. Gavin Newsom said in a recent Twitter video. “Not only here in our state, but of course, all across this country.”

However, not everyone is satisfied with the governor’s plan. According to KPIX 5 in San Francisco, many environmental groups believe that sending out debit cards is a misguided approach to solving the problem.

“It’s like a Band-Aid that doesn’t really do anything for the current problem we’re in,” Laura Deehan, the director of Environment California, told the news station.

Instead of spending $9 billion on the rebates, the nonprofit wants to see that money used for more electric vehicle charging stations, transit system upgrades, and programs that encourage more people to use electric bicycles.

“It reminds me of a glass of wine for an alcoholic. It feels really good when you’re struggling,” Deehan said. “But the problem is we’re dependent on this fuel to power our lives that is hurting your health and planet.”