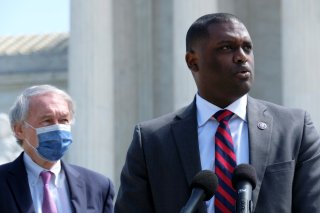 Known as the End Child Poverty Act, the bill aims to provide additional support for millions of financially struggling families still reeling amid the nearly two-year-long pandemic. Moreover, just last month, the enhanced version of the CTC ended without getting an extension through the highly contentious Build Back Better legislation.

“Child poverty is a critical issue in the United States and I am proud to join Congressman Jones in introducing this universal child benefit that will surely make it easier for working class people to afford necessities like diapers and childcare, and provide a long overdue safety net for our nation’s families and children,” Tlaib said in a statement.

“One out of five children live in poverty in Michigan and saw the benefit of the child tax credit on our families. Too many families are now going without help after the Senate failed in extend[ing] the CTC and they deserve to have solutions in their government that will ensure that food is on their table and a roof is over their head,” she continued.

The End Child Poverty Act would replace the CTC and the child provisions in the EITC with a universal benefit that would provide a monthly $393 payment per child up to age eighteen. There are no income phase-ins or phase-outs, and children will be automatically enrolled at birth. The Social Security Administration would be in charge of distributing the funds.

Estimates provided by the People’s Policy Project have revealed that the End Child Poverty Act could potentially cut child poverty by sixty-four percent and reduce “deep child poverty” by 70 percent.

“In the wealthiest nation on Earth, no child should be living in poverty. But today, due to decades of policy failure, far too many children in America are,” Jones said in a statement.

“We know how to solve this problem … By creating a universal, monthly child allowance, the End Child Poverty Act will do exactly that—ensuring every child has the resources and support they need to reach their full potential. I’m proud to introduce this critical legislation, and I’ll keep fighting to ensure every child and family can live in dignity,” he added.

Still Holding Out Hope for CTC

There are, however, still growing calls among the public and some lawmakers to extend the enhanced child tax credit, which previously provided eligible parents as much as $3,600 for a child under the age of six and up to $3,000 for children between ages six and seventeen. Broken down, this all meant that a $250 or a $300 payment for each child was directly deposited or sent off via traditional mail to parents each month.

Top senate Democrats, led by Senator Michael Bennet (D-CO), recently pressed President Joe Biden in a letter to keep the enhanced credit as the “centerpiece” of the stalled Build Back Better legislation.