Families Are Already Struggling Without the Child Tax Credit 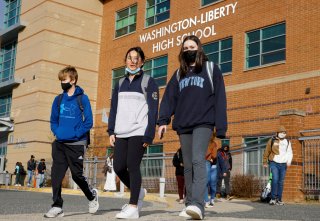 Brought into being by the American Rescue Plan Act that passed in March of last year, the child tax credit provided direct monthly payments to most American families between July and December of 2021.

For much of last year, the Biden administration and its Democratic allies in Congress pushed to extend the credit—either for one more year or even longer—with some in Congress even calling for it to be made permanent. The version of the Build Back Better spending bill that passed the House in December included a one-year extension.

However, Sen. Joe Manchin (D-WV) announced his opposition to that bill, specifically citing the child tax credit provision, which meant that January arrived without the child tax credit payments. And while Congress and the White House are expected to talk again about some version of the Build Back Better agenda, the future of the expanded child tax credit looks to be in doubt.

This week, CNN talked to former recipients of the credit who did not receive it this month.

One woman, a resident of Manchin’s home state of West Virginia, told the network that she has taken to toilet-training her two-year-old daughter in order to save money on diapers.

"That is a huge expense,” the woman said of diapers. "When you don't have the funds to cover those things, you've got to get creative … Go speak to the working class and see how they feel," the woman said to Manchin specifically. "I will tell you, it helped a lot. And now I'm in a predicament where I can't work because there is no child tax credit to help me with daycare."

Earlier this week, President Biden indicated that while he hopes to move ahead with the Build Back Better talks, the child tax credit may very well not make it into the final bill. Any such bill would have to gain the support of all fifty Democratic senators, including Manchin, while also passing with the slim Democratic majority in the House.

Several senators wrote a letter last year that pushed for the child tax credit to be revived due to its success in alleviating child poverty and hunger in 2021. CNN, citing the IRS, stated that thirty-six million families received a total of $93 billion through the program.