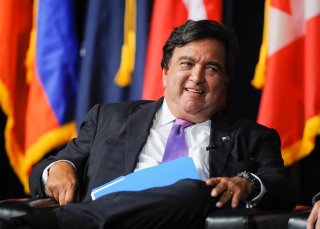 Former New Mexico Gov. Bill Richardson is expected to travel to Moscow within the next few weeks for talks aimed at finding a deal to free detained women’s basketball star Brittney Griner, a source told ABC News over the weekend.

Richardson, a former U.S. ambassador to the United Nations and energy secretary in the Clinton administration, boasts a long and successful history of working to free Americans wrongfully detained abroad. Through his nonprofit, the Richardson Center, he has helped return U.S. citizens imprisoned in Iran and North Korea, among others.

He most recently played a role in a prisoner swap that saw Russia release former U.S. Marine Trevor Reed after nearly two and a half years in captivity. Russia has suggested it's interested in trading Griner for Russians held in U.S. prisons.

ABC News reported that Richardson is representing the Griner family as well as the family of Paul Whelan, another former Marine who has been held by Russia for three and a half years. “What I can say [and is publicly known] is both the Whelan and Griner families have asked us to help with the release of their loved ones,” Mickey Bergman, executive director at the Richardson Center for Global Engagement, told the news outlet in an email.

Meanwhile, National Security Council (NSC) spokesperson Adrienne Watson said, “NSC leadership are in touch with Bill Richardson. We appreciate his commitment to getting Americans home and are pursuing the release of Brittney and Paul through government channels,” in a statement.

Griner, a two-time Olympic gold medalist in basketball, was detained at Sheremetyevo International Airport on February 17 after the Russian Federal Customs Service claimed to have found vape cartridges containing the marijuana concentrate hashish oil in her luggage. The Biden administration has classified Griner as “wrongfully detained.”

Late last week, Griner pled guilty to bringing hashish oil into the country, telling a judge that she had done so “inadvertently” while asking the court for mercy. “She decided to take full responsibility for her actions as she knows that she is a role model for many people,” her lawyers’ statement read.

“Considering the nature of her case, the insignificant amount of the substance and [Griner’s] personality and history of positive contributions to global and Russian sport, the defense hopes that the plea will be considered by the court as a mitigating factor and there will be no severe sentence,” the statement continued.

The hearing also saw a senior U.S. diplomat give Griner a letter that President Joe Biden wrote in response to her July 4 letter, which she used to plead for her release. Biden has also spoken by phone with Cherelle Griner, the wife of Brittney Griner.