Gas Prices Continue to Rise, But Will They Peak Soon? 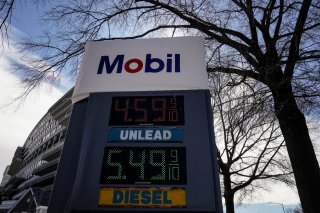 A week after gas prices hit record highs, the average price rose again Monday, reaching $4.32 per gallon, according to a GasBuddy report. That price represents a $0.26 increase over a week ago, $0.83 cents over a month ago, and $1.47 over a year ago.

The surge has mostly been brought about as a result of Russia’s invasion of Ukraine and the recent announcement of U.S. sanctions on Russian oil. Gas prices had risen for much of 2021, and even early in 2022 before the conflict began, but they are now rising further.

However, GasBuddy believes that the top has been reached.

“After a furious increase in the national average over the last two weeks, the top appears to be in with average gas prices slowly starting to decline over the last few days,” Patrick De Haan, head of petroleum analysis at GasBuddy, said in a blog post.

“While the decrease could be short-lived, it is nonetheless a well-needed break from the large surge in gas prices we’ve experienced over the last few weeks. The situation remains fluid, and escalations remain very possible, if not likely. For now, a $4.50 per gallon national average is off the table, but it certainly could be a future possibility as long as there is conflict between Russia and Ukraine.”

However, oil prices have begun to drop from their high. West Texas Intermediate crude oil reached as high last week as  $117.99 a barrel but has dropped down to $102.52. The drop was tied to peace talks between Russia and Ukraine, although nothing has come of those talks yet.

Another weekly report, from AAA, had the national average at $4.33 a gallon, and the price of oil going below $110 a barrel, an increase from a high of $123 per barrel.

“It bears reminding that the cost of oil accounts for about 50% of what drivers pay at the pump,” Andrew Gross, AAA spokesperson, said in a statement. “This war is roiling an already tight global oil market and making it hard to determine if we are near a peak for pump prices, or if they keep grinding higher. It all depends on the direction of oil prices.”

This week, FiveThirtyEight looked at what the political fallout could be from the surging gas prices. While rising gas prices tend to mean bad news for the incumbent president, some voters might blame the conflict on what is happening abroad rather than cite domestic political causes. And, of course, gas prices and other manifestations of inflation had already been apparent for some time before the war started.

“The impact of economic indicators on presidential approval depends upon the attribution that the public makes for the cause of economic indicators getting better or worse,” Jon Krosnick, a social psychologist at Stanford University, told the site. “In other words, what matters here is whether the president can reasonably be held responsible for what happened to gas prices, or anything else [can].”