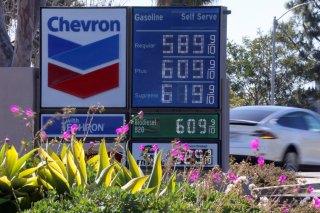 With gas prices still very high amid the war in Ukraine, questions have been raised over whether the government can do anything about it.

Some members of Congress have proposed a possible solution, although a proposal like it has already been publicly rejected by the White House.

Three Democratic House members, representatives Mike Thompson (CA-05), John Larson (CT-01), and Lauren Underwood (IL-14), announced last week that they have introduced the Gas Rebate Act of 2022, which would send Americans $100 (and an additional $100 per dependent) for the rest of the year, in any month when the average gas price is over $4 per gallon.

"Americans are feeling the impact at the pump of Vladimir Putin’s illegal invasion of Ukraine, and right now we must work together on commonsense policy solutions to ease the financial burden that my constituents are feeling," Rep. Thompson said in a statement last week. "The Putin Price Hike is putting strain on our economy, and I am proud to be working with Reps. Larson and Underwood to introduce this legislation to provide middle-class Americans with monthly payments to ease the financial burden of this global crises."

Not in the Cards?

However, the White House went on the record yesterday to state that it is not interested in sending Americans "gas cards."

Per CNN, the White House "considered" the proposal, before deciding that it wasn’t workable. Reasons for that included the high costs involved to worries that the cards would be stolen from mailboxes. Axios added that such a policy maneuver would be "expensive and poorly targeted," could exacerbate inflation, and overextend the IRS right at the height of tax season.

"There’s a variety of ideas being discussed to ensure that the costs American families are feeling at the pump are as minimal as possible," White House spokesperson Vedant Patel told Axios. "However, gas cards being sent to the American people is not seriously under consideration. It is not an administratively feasible solution and the Biden administration is not considering this as a serious option to help American families."

There’s also skepticism among Democrats in Congress about such proposals.

"That’s not happening," Rep. Kurt Schrader (D-OR) told Roll Call about the possibility of gas rebates. "It’s just unrealistic. I mean, we can't afford to do all that sort of thing at this point in time. It's pandering. Let's be smart." He added that he has polled his constituents and that they agree with his stance.

Another Democrat in Congress, Rep. Ro Khanna (D-CA) has introduced a measure to implement a "windfall profits" tax on large oil producers.

Meanwhile, per the Los Angeles Times, a $400 state-level gas rebate is under consideration in California.

"Our goal is to be able to do this in the spring, and all the folks here are going to be pushing really, really hard to make that happen," Assembly Member Cottie Petrie-Norris (D-Irvine) told the newspaper of the proposal. One reporter said, in that newspaper’s newsletter, that the dollar amount is likely to be subject to the usual give-and-take of political negotiations.

While gas prices remain unusually high, they are beginning to drop from the highs of earlier this month. According to GasBuddy, the average gas price in the United States dropped this week to $4.24. The $0.09 drop represents the first drop in the average in twelve weeks.

"GasBuddy, last week, predicted that a top was in for the national average price of gasoline, and indeed, for the first time in 12 weeks, the national average price of gasoline has declined. While the decline is still subject to changes in global supply and demand, Covid, and Russia’s war on Ukraine, we are poised to see additional downdrafts at the pump this week," Patrick De Haan, head of petroleum analysis at GasBuddy, said in the announcement.

"For now, gasoline demand has shown absolutely no signs of buckling under the pressure of higher prices, even as California nears an average of $6 per gallon, with spring break travel well underway. If the situation does worsen, with more oil being kept away from global markets, it’s not impossible that gas prices would still have to climb a considerable amount for Americans to start curbing their insatiable demand for gasoline."

AAA also said in its weekly report Monday that average gas prices had dropped, from a high of $4.33 last week to  $4.25 this week.