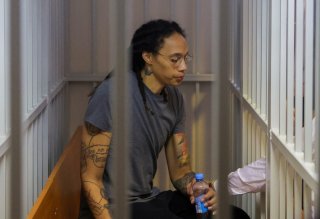 Cherelle Griner said her wife, WNBA star Brittney Griner, is at her “absolute weakest moment in life right now” as she prepares for an October 25 hearing for her appeal of a nine-year prison sentence over drug charges, Axios reported.

“She’s very afraid about being left and forgotten in Russia,” Cherelle said in an interview Thursday on CBS Mornings. “She’s saying things to me like, ‘My life just don’t even matter no more.’”

One recent call with Brittney “was the most disturbing phone call I’d ever experienced. You could hear that she was not okay. If you think about just a person’s suffering and when they have suffered to a max … she was at the max that day,” she continued. “I don’t know if she has anything left in her tank to continue to wake up every day and be in a place where she has no one.”

Cherelle added that she cried for two to three days after the call and barely got out of bed.

Cherelle, who met with President Joe Biden last month, said that the president is “doing what he can, but there’s another party in this situation.” She noted that  Russian president Vladimir Putin will have to change his mindset.

“On its face it just seems like my wife is a hostage. To know that our government and the foreign government is sitting down and negotiating for her release? She’s a hostage,” she said.

“I feel like at this point it’s going to take Putin to have that same mindset and say, ‘You know what? Brittney Griner, who came to my country for seven, eight years, and helped my country be recognized through sport, paid taxes in my country, helped my country. I’m going to sit at a table, and I’m going to be clear about what I need in return for her release so that we can actually get a meeting of the minds between these two governments,’” she continued.

Brittney, a Houston native and an all-star center with the WNBA’s Phoenix Mercury, was initially detained at Moscow’s Sheremetyevo International Airport on February 17 after the Russian Federal Customs Service claimed to have found vape cartridges containing the marijuana concentrate hashish oil in her luggage. During her testimony, the two-time Olympic gold medalist contended that she did not know how the cannabis oil for which she had a doctor's prescription ended up in her bag, explaining that she had packed in haste while under great stress.

However, in early August, the judge found that she had criminal intent and said she was guilty of smuggling and storing illegal drugs. The nine-year sentence was close to the maximum of ten years, and her lawyers argued after the conviction that the punishment was excessive.