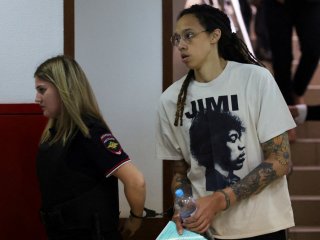 A bipartisan Senate resolution introduced on Thursday is calling for the immediate release of WNBA star Brittney Griner from a Russian prison.

“I've worked with the State Department to make sure that Brittney Griner's safe return is a top priority, and this bipartisan resolution shows the Senate's support for her as well,” Kelly said in a statement, per ABC News.

“Brittney Griner is an inspiration to Arizonans and Americans across the country. I've had the pleasure of meeting her and seeing her talent on the court up close. The Russian government unjustly detained Brittney and we will keep working with the administration to ensure her safe and swift return,” he continued.

The resolution also offered support for Griner's family, Paul Whelan, another American who is detained in Russia, and all of the other “prisoners unjustly imprisoned in the Russian Federation.” It also called for Russia to “provide consular access” to Griner and to respect her human rights.

Griner, a two-time Olympic gold medalist in basketball, was detained at Sheremetyevo International Airport on February 17 after the Russian Federal Customs Service claimed to have found vape cartridges containing the marijuana concentrate hashish oil in her luggage. During her hearing, Griner told the judge that she had done so “inadvertently” while asking the court for mercy. Her lawyer also gave the court a U.S. doctor's letter recommending that she use medical cannabis to treat pain. Medical marijuana is not legal in Russia.

“The Department of State has determined that Brittney was wrongfully detained—it's past time for her to come home,” Sinema said in a statement.

Meanwhile, former New Mexico Gov. Bill Richardson has confirmed that he will soon travel to Moscow for talks aimed at finding a deal to free Griner. A former U.S. ambassador to the United Nations and energy secretary in the Clinton administration, Richardson, through his nonprofit the Richardson Center, has previously helped return U.S. citizens imprisoned in Iran and North Korea, among others.

Earlier this week, President Joe Biden signed an executive order that reinforces the U.S. government’s efforts to support families of Americans wrongfully detained or held hostage overseas and impose sanctions on the criminals, terrorists, or government officials who hold them captive.