HHS Secretary: Women Will Have Access to Abortion in Rape, Incest Cases 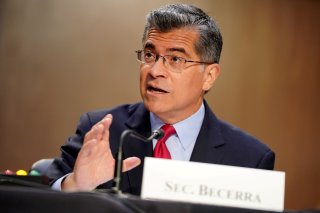 The U.S. Department of Health and Human Services (HHS) Secretary Xavier Becerra has taken action to direct federal health agencies to ensure victims of rape and incest in states where abortion is now illegal can access medications that can end pregnancies.

Per CNN, Becerra told reporters on Tuesday that federal law mandates that HHS programs grant abortion pills in exceptional circumstances, such as when the life of a woman is at risk or in cases of sexual assault. He added that obligation takes precedence over the abortion bans that some states have imposed already via so-called “trigger laws” in the wake of the Supreme Court’s decision last Friday to overturn Roe v. Wade, the 1973 landmark decision that established the constitutional right to an abortion.

“Five Americans decided to use the vast power bestowed upon them by our democracy and our Constitution to unconscionably put at risk the life and health of millions of our fellow Americans,” Becerra noted during the press conference.

“HHS has been preparing for this for some time. There is no magic bullet. But if there is something we can do, we will find it and we will do it at HHS. Indeed, that was the instruction I received from the president of the United States,” he continued.

Becerra, though, didn’t say how aggressive the federal government will be in fighting states’ abortion restrictions. “We are going to stay within the confines of the law,” he said.

However, some states like South Dakota are already doubling down on their stance that no abortion exceptions will be made, even in cases of rape or incest.

“I believe every life is precious … and we know so much more using technology and science than we did even ten, fifteen years ago about what these babies go through the pain that they feel in the womb, and will continue to make sure that those lives are protected,” South Dakota Gov. Kristi Noem told CBS News’ “Face the Nation” on Sunday.

“And I just have never believed that having a tragedy or tragic situation happened to someone is a reason to have another tragedy occur,” she continued.

Meanwhile, Democrats are ramping up pressure on President Joe Biden to take executive action to protect abortion rights. Senators Elizabeth Warren (D-MA) and Patty Murray (D-WA) are leading a group of more than twenty other Senate Democrats calling on the president to look into the viability of several executive actions.

“We urge you to immediately issue an executive order instructing the leaders of every federal agency to submit their plans to protect the right to an abortion within thirty days. Americans across the country are at risk of losing their fundamental rights, including their constitutional right to abortion protected for generations. They deserve no less than a whole-of-government response,” they continued.