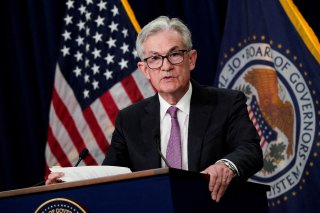 Amid a sharp drop in gas prices over the past two months, the consumer outlook for inflation declined significantly in July, according to a key Federal Reserve Bank of New York survey released on Monday.

“Median inflation uncertainty—or the uncertainty expressed regarding future inflation outcomes—declined slightly at both the one- and three-year-ahead horizons,” the report wrote.

“Uncertainty at the five-year-ahead horizon decreased more substantially,” it continued.

The survey results come as the Federal Reserve has been hiking interest rates aggressively to tame persistent inflation. Late last month, the central bank raised its key short-term rate by three-quarters of a percentage point for a second straight month. The unanimously approved rate hike now puts the federal funds rate at a range of 2.25 percent to 2.5 percent, the highest level seen since December 2018.

In its post-meeting statement, the rate-setting Federal Open Market Committee noted that “inflation remains elevated, reflecting supply and demand imbalances related to the pandemic, higher food and energy prices, and broader price pressures.” The committee reiterated that it “anticipates that ongoing increases in the target range will be appropriate.”

Over the past weekend, Federal Reserve Governor Michelle Bowman asserted that she doesn’t expect inflationary pressures to recede anytime soon and sees a need to keep pushing rates higher.

“My view is that similarly sized increases should be on the table until we see inflation declining in a consistent, meaningful, and lasting way,” she said in prepared remarks in Colorado for the Kansas Bankers Association.

She added that she sees “a significant risk of high inflation into next year for necessities, including food, housing, fuel, and vehicles.”

“I think we’ll probably have to be higher for longer in order to get the evidence that we need to see that inflation is actually turning around on all dimensions and in a convincing way coming lower, not just a tick lower here and there,” he told CNBC.

However, Bullard contended that he doesn’t think the economy has been tipped into a recession.

“We’re not in a recession right now. We do have these two quarters of negative GDP growth. To some extent, a recession is in the eyes of the beholder,” he said.