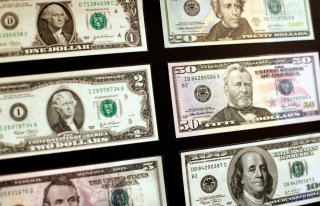 With U.S. inflation still sitting at a forty-year high, it appears that American workers are having a difficult time making ends meet.

As reported by CNBC around 64 percent of the U.S. population was living paycheck to paycheck as of March. The figure was a shade below the 65 percent registered in 2020, according to a report released by LendingClub. “The number of people living paycheck to paycheck today is reminiscent of the early days of the pandemic and it has become the dominant lifestyle across income brackets,” explained Anuj Nayar, LendingClub’s financial health officer.

The consumer price index (CPI), released earlier this week, was found to have jumped 8.3 percent in April year-over-year, only falling slightly from 8.5 percent in March, which was the highest since 1981, the Bureau of Labor Statistics reported. Broken down, the food index rose 0.9 percent month-over-month and 9.4 percent on an annual basis. The shelter index—which comprises roughly a third of the CPI weighting—trekked higher by another 0.5 percent over the past month and is up 5.1 percent on a yearly basis, the fastest rate since April 1991.

“Rising prices are putting household budgets in a vise,” Greg McBride, chief financial analyst at Bankrate.com, told the business news outlet. “Price increases are widespread, but look at food and shelter—which together account for 40 percent of the weighting in the CPI and more than that for many households,” he continued.

Meanwhile, other recent studies and polls have also shown that many Americans are struggling in this high-inflationary environment. For example, a survey released by Salary Finance has revealed that more than 75 percent of working Americans admitted that high inflation has negatively impacted their finances over the past year. In fact, about 20 percent said that they regularly run out of money between paychecks. That figure was only at 15 percent last year.

Additionally, an analysis by Moody’s Analytics has indicated that the currently seen high-inflationary pressures are costing the average American household an additional $327 per month—roughly $30 more than the month prior.

A separate analysis released by Bloomberg economists has suggested that high inflation will cost the typical American household an extra $5,200 this year, which comes out to $433 in extra monthly costs. And finally, according to Yardeni Research, the elevated costs for gas and food could potentially amount to “$3,000 less money” for the average American household.

“Gasoline now costs the average household almost $2,000. … We estimate that the average household is currently spending at least $1,000 (according to a seasonally adjusted annual rate) more on food as a result of rapidly rising grocery prices,” the firm’s president, Edward Yardeni, wrote in a social media post.