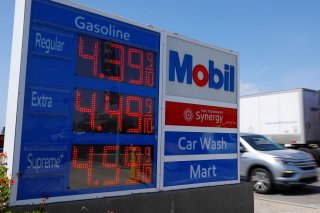 The latest report showed that consumer prices surged 7.5 percent in January compared to a year earlier, a shocking rise that is considered the fastest annual pace in about four decades.

However, according to a new analysis conducted by researchers at the University of Pennsylvania’s Wharton School, it appears that low-income Americans are bearing the brunt of today’s red-hot high inflationary pressures.

“We estimate that increases in wage earnings in 2021 offset the higher cost of living due to inflation for most households with incomes between $20,000 and $100,000,” the researchers wrote.

This means that the higher living costs for the lowest income earners came in at more than triple their extra annual pay—$1,837 versus $578—the study noted.

“The dynamic means the lowest earners felt a decline in purchasing power in 2021, unless they were able to supplement earnings with other income like government benefits,” CNBC writes.

Even more pain among low-income earners could be felt over the next several months, as the enhanced child tax credit likely won’t be revived soon and the current pause on student loan bill payments and interest expires on May 1.

Since the monthly payments from the enhanced credits stopped at the beginning of the year, nearly 3.7 million children fell into poverty, according to a study conducted by the Center on Poverty and Social Policy at Columbia University. The data showed that from December 2021 to January 2022, the monthly child poverty rate rose from 12.1 percent to 17 percent.

“While in place, the monthly child tax credit payments buffered family finances amidst the continuing pandemic, increased families’ abilities to meet their basic needs, reduced child poverty and food insufficiency, and had no discernable negative effects on parental employment,” wrote the study’s authors.

Another recent survey conducted by ParentsTogether Action revealed that nearly 60 percent of parents said that since the monthly payments came to a halt, they haven’t been able to afford enough groceries.

As for the student loan payments, a new survey by the Student Debt Crisis Center showed that 93 percent of respondents are unprepared to restart the monthly payments. One in three borrowers admitted that they will have to reduce spending on necessities to cover the loan payments.

“Our findings show that the ongoing pandemic combined with unprecedented inflation are huge obstacles for borrowers who are, by and large, not ready to resume payments, struggling to afford basic needs, and confused about their options moving forward,” Natalia Abrams, president and founder of the Student Debt Crisis Center, said in a statement.