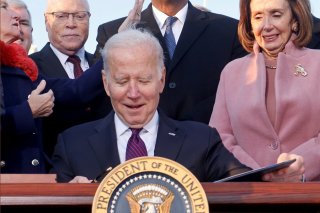 The bipartisan bill leaves out certain priorities that some Democratic legislators had sought, and focuses on conventional infrastructure projects. However, it nonetheless contains roughly $1.2 trillion in overall spending, a substantial increase over previous years’ infrastructure commitments.

Half New Spending, Half Old

Around half of the bill is dedicated to payments for the costs of upkeep on America’s basic infrastructure. $284 billion has been set aside for upkeep, rather than new construction, to conventional infrastructure, including roads, bridges, and waterways, according to CNBC.

An additional $266 billion has been allocated for maintenance on “core infrastructure” areas, including electricity, clean water, and internet access.

What About the Debt?

Possibly in an effort to contrast his administration with the free-spending Trump administration, which raised the national debt by cutting taxes in 2017 and vastly increasing government spending during the COVID-19 pandemic, Biden has portrayed himself as a fiscal moderate and has attempted to balance new projects with targeted new taxes, adding less to the federal deficit.

Unfortunately for Biden, the Congressional Budget Office estimated in August that the infrastructure bill would add more than $250 billion to the debt over ten years. This is still far from the Trump presidency’s level of spending, which added an average of nearly $1 trillion per year to the debt—but Biden’s presidency is still young.

The Biden administration chose Landrieu in part due to his work on the reconstruction of New Orleans, where he served as mayor from 2010 to 2018, after Hurricane Katrina and the Deepwater Horizon oil spill. In that role, according to the White House, Landrieu “hit the ground running, fast-tracking over 100 projects and securing billions in federal funding for roads, schools, hospitals, parks, and critical infrastructure.”

How Bipartisan Was It Really?

The House vote was 228 to 206; thirteen Republican legislators voted for the bill, and six Democrats voted against it.

The Democrats who opposed the bill, all affiliated with the party’s progressive wing, did so in objection to its passage without Biden’s larger spending bill accompanying it. This point had delayed the passage of the bill for months; the Senate had originally approved it in August.

The Biden administration has sought to capitalize on the passage of the bill to pass the “Build Back Better” spending bill, which contains $1.75 trillion in more ambitious spending projects, including subsidized child care and health care expansion.

That bill was originally cut in half, from $3.5 trillion, after conservative Democrats, Joe Manchin (D-WV) and Kyrsten Sinema (D-AZ), indicated they would not support it because of its cost.