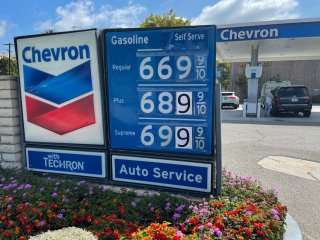 After months of falling gas prices, the average price in the United States has begun to rise again, according to the latest GasBuddy weekly report.

The average gas price rose by 11.1 cents to $3.78 per gallon, according to Monday’s report. However, pricing trends have begun to diverge in different parts of the country following Hurricane Ian.

“With gas prices continuing to surge on the West Coast and Great Lakes, the national average saw its second straight weekly rise. But at the same time, areas of the Northeast and Gulf Coast have continued to see declines as the nation experiences sharp differences in trends between regions,” Patrick De Haan, head of petroleum analysis at GasBuddy, said in the report.

“Some West Coast states saw prices rise 35 to 55 cents per gallon in the last week as refinery issues continued to impact gasoline supply, which fell to its lowest level in a decade in the region, causing prices to skyrocket. While I’m hopeful there will eventually be relief, prices could go a bit higher before cooling off. In addition, OPEC could decide to cut oil production by a million barrels as the global economy slows down, potentially creating a catalyst that could push gas prices up further.”

The price most commonly encountered by U.S. motorists was $3.29 per gallon. Moreover, every state had an average price of over $3. Mississippi had the cheapest average price in the county at $3.02 a gallon, followed by Louisiana and Texas. California was the most expensive state, with an average price of $6.25.

“Oil companies are ripping you off. Their record profits are coming at your expense at the pump,” California Gov. Gavin Newsom said this week. “I’m calling for a NEW windfall tax exclusively on oil companies. If they won't lower their prices we will do it for them.”

“No, California politicians have ripped you off. By lying about why prices are high,” he said on Twitter. "Why is California at $6.50 while Texas is at $3? Because California politics. Why else did you waive RVP requirements? Hint: because smart people told you they cause higher.”

“The regional differences in gas prices are stark at the moment, with prices on the West Coast hitting $6 a gallon and higher, while Texas and Gulf Coast states have prices dipping below $3 in some areas.” Andrew Gross, the AAA spokesperson, said in AAA’s own weekly report on Monday. “At least six California refineries are undergoing maintenance, and there is limited pipeline supply to the West Coast from locations east of the Rockies.”