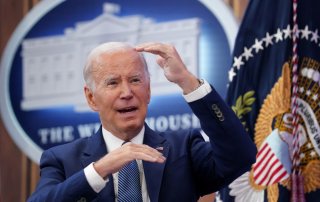 Rising inflation isn’t good news for very many people but at least Social Security recipients will get a big raise next January.

The Social Security Administration (SSA) announced Thursday that there will be an 8.7 percent increase in Social Security benefits starting next January. That’s an increase of  $140 for the average beneficiary and represents the largest cost of living adjustment (COLA) increase in forty years.

“Medicare premiums are going down and Social Security benefits are going up in 2023, which will give seniors more peace of mind and breathing room,” Acting Commissioner Kilolo Kijakazi said in the press release. “This year’s substantial Social Security cost-of-living adjustment is the first time in over a decade that Medicare premiums are not rising and shows that we can provide more support to older Americans who count on the benefits they have earned.”

The 8.7 percent number is directly in line with the most recent projection from the Senior Citizens League, last month.

The League issued its own statement after the announcement.

“A Social Security cost–of–living–adjustment (COLA) of 8.7% is rare — enjoy it now. This may be the first and possibly the last time that beneficiaries today receive a COLA this high. There were only three other times since the start of automatic inflation adjustments that COLAs were higher (1979-1981),” the organization said. “Without a COLA that adequately keeps pace with inflation, Social Security benefits purchase less over time, and that can create hardships especially as older Americans live longer lives in retirement. It is too early to say how well the 8.7% COLA will keep pace with inflation in 2023. The 5.9% COLA received this year has fallen short on average by 50%.”

The announcement arrived at the same time that the Bureau for Labor Statistics announced that inflation rose 0.4 percent in September, a larger increase than what had been projected.

The White House issued a statement on Social Security on the eve of the announcement.

“Tomorrow, seniors and other Americans on Social Security will learn precisely how much their monthly checks will increase – but experts forecast it will be $140 per month, on average, starting in January. For the first time in over a decade, seniors’ Medicare premiums will decrease even as their Social Security checks increase,” White House Press Secretary Karine Jean-Pierre said in the release.

“MAGA Republicans in Congress continue to threaten Social Security and Medicare – proposing to put them on the chopping block every five years, threatening benefits, and to change eligibility. If Republicans in Congress have their way, seniors will pay more for prescription drugs and their Social Security benefits will never be secure. The President has a different approach – one that continues the progress we’ve made and saves seniors money.”

Various organizations that deal with Social Security weighed in on the announcement.

“The annual cost of living adjustment is one of Social Security's most essential and unique features. Unlike private-sector pension plans, whose benefits erode over time, Social Security is designed to keep up with rising prices,”  Nancy Altman, President of Social Security Works, said in a statement Thursday.

“This year's COLA, the largest in over forty years, is especially good news because it is paired with a rare decline in the Medicare Part B premium. That means that Social Security beneficiaries will have more money in their pockets next year … As important as the COLA is, it is not a benefit increase. It simply ensures that seniors and other beneficiaries can tread water. Unfortunately, even with today’s COLA, many simply cannot make ends meet, because their earned Social Security benefits are inadequately low. Congress should pass legislation to protect and expand Social Security, and pay for it by requiring the wealthiest to contribute their fair share.”

The announcement of the increase comes as the two parties are fighting over Social Security as an unusually salient issue in this year’s midterm elections.

Bloomberg reported this week that in the event of a Republican takeover of both houses of Congress in the midterm elections, the GOP would push for cuts in federal spending, even possibly using a debt ceiling crisis in order to push through such cuts.

Democrats did react to the talk, per the Bloomberg story.

“House Republicans are openly threatening to cause an economic catastrophe in order to realize their obsession with slashing Medicare and Social Security,” a spokesperson for House Speaker Nancy Pelosi said, per Bloomberg. “As House Republican leaders’ own words constantly reveal, dismantling the pillars of American seniors’ financial security is not a fringe view in the extreme MAGA House GOP, it is a broadly held obsession at the core of their legislative agenda.”