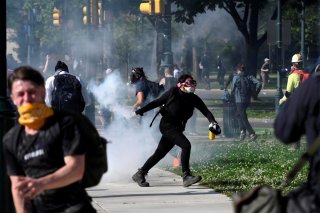 A federal judge said that “no civilized society would condone” the alleged actions of Minneapolis police towards journalists, even as she declined to issue an order giving special protections to the press.

Freelance journalist Jared Goyette sued the city of Minneapolis and state of Minnesota last week after police allegedly fired rubber bullets at his face during protests over the police killing of George Floyd.

The American Civil Liberties Union and Communications Workers of America—the largest telecommunications and media union in the United States—joined the lawsuit, asking for a restraining order that would ban the use of crowd control tactics against reporters.

Judge Wilhelmina M. Wright rejected the proposed order in a Tuesday ruling, arguing that the police have already taken steps to correct their alleged misbehavior. But it was clear that she did not accept the police’s actions.

“Several members of the media were allegedly threatened or subject to unlawful arrests. Others sustained severe, permanent injuries while reporting on events of intense public concern. They deserve better,” she wrote.

“Law enforcement has a difficult job under normal circumstances, and “officers are often forced to make split-second judgments,” Wright added in a footnote. “This was especially true when Minnesota endured an unprecedent [sic] period of rioting, looting, arson, and civil unrest. Notwithstanding, there remain allegations of conduct that no civilized society would condone, even in an uncivilized time.”

Goyette had allegedly been shot in the face with a “less-lethal” round, also known as a “rubber bullet.” He also said that he had been held at gunpoint despite identifying himself as a reporter.

His lawsuit claimed that Minneapolis police had “a custom or policy” of attacking journalists, citing several other incidents during the unrest.

Freelance reporter Linda Tirado was permanently blinded in one eye after she was allegedly struck in the face by a rubber bullet.

CNN newscaster Omar Jimenez and his entire crew were arrested during a live broadcast, an incident that Gov. Gretchen Whitmer eventually apologized for.

Goyette’s lawsuit had asked for, among other things, a restraining order specifically protecting people who have “identified themselves as a member of the news media” or are clearly “engaged in news gathering activities.”

The order would include a blanket ban on using tear gas, rubber bullets, batons, or “threatening language or gestures” against members of the media.

Wright, however, said that a restraining order would not be necessary to prevent “irreparable harm” moving forward.

She noted that the city has already agreed to several reforms after a lawsuit in a state court, requiring the police c-hief’s approval to deploy tear gas or rubber bullets and making it easier to hold officers accountable for misconduct.

Wright also emphasized that Minneapolis police have not used rubber bullets since May 31.

“Goyette does not allege that any of the conduct that he seeks to enjoin—occurring over a five-day period of unprecedented civil unrest—has occurred since May 31, 2020, or facts that plausibly demonstrate that such conduct is likely to recur imminently,” she wrote.