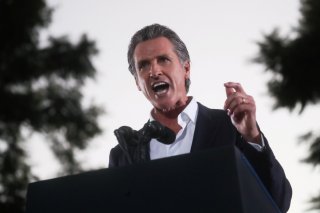 The California recall election, in which embattled Governor Gavin Newsom faces more than forty challengers, is set to take place today in the Golden State. The polls will open at 7:00 a.m. and close at 8:00 p.m. A list of polling places has been provided on the California Secretary of State’s official website.

Newsom’s leading position in the polls, though by no means certain, has trended upward over the past month. In the first and second weeks of August, the contest was thrown into turmoil after a San Diego Union Tribune poll revealed that fifty-one percent of Californians supported Newsom’s ouster, illustrating widespread discontent over California’s coronavirus lockdowns and school closures. Subsequent surveys, however, have repeatedly put him in the lead. Political analysis website FiveThirtyEight suggests that fifty-seven percent of Californians will vote to keep the governor, while political betting site PredictIt gives him a ninety-three percent chance of surviving the recall.

However, some commentators and analysts have cautioned against early optimism, noting that high Republican turnout and a Democratic sense of complacency could doom Newsom. The Democratic campaign’s questionable electoral strategy, in which it failed to run or endorse a potential Democratic challenger as a back-up candidate and instead urged California voters to boycott the selection of a replacement, means that if Newsom loses the recall vote, his succession by a Republican is a virtual guarantee.

Newsom’s forty-six challengers include former Olympian and reality TV star Caitlyn Jenner, former Republican gubernatorial candidate John Cox, Democrat YouTuber Kevin Paffrath and San Diego Mayor Kevin Faulconer. However, his highest-polling opponent has been conservative radio host Larry Elder, who created controversy on Monday after implying that the election would be rigged against him and urging his supporters to report suspected voter fraud to a website his campaign created. Commentators have compared this effort to President Donald Trump’s efforts to overturn the 2020 election. One commonality between the two attempts has been hostility toward mail-in ballots, which Elder argues are less secure than in-person ones.

Elder declined to confirm or deny that he would accept the results of the recall election in a Monday interview with NBC News.