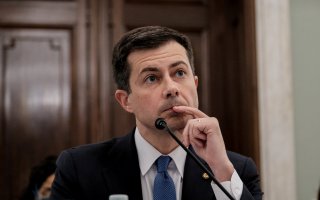 In the letter, signed by Sen. Ed Markey (D-MA) and five other members of Congress, the lawmakers invoked a charter-broker rule, which the Trump administration issued in 2018, that bans charter operators from “misrepresenting” information such as the “time of departure or arrival, points served, route to be flown, stops to be made, or total trip-time.”

“Charter brokers and air carriers should not assist states like Florida in relocating migrants with false promises about their ultimate destination,” the lawmakers wrote.

“The Department should use all tools within its authority—including enforcement of its consumer protection rules—to ensure that migrants are not transported under false pretenses as part of a competition among wannabe Trump acolytes to claim the mantle of cruelest governor in the United States,” they continued.

“We urge DOT to swiftly investigate the company and individuals responsible for these representations and take all necessary action to protect migrants from such dishonest behavior. … To the extent that any of those individuals or entities misled migrants about flight details, they may have violated the Charter-Broker Rule and be liable for a civil penalty,” they added.

Last week, three of the migrants flown to Martha’s Vineyard in Massachusetts filed a class-action lawsuit against DeSantis and other state officials, claiming that they were victims of fraud for political purposes. The suit stated that the defendants spent more than $600,000 chartering the planes and told the migrants they were headed to Boston or Washington, D.C., but they were instead dropped off at Martha’s Vineyard without food, water, or shelter.

“These immigrants, who are pursuing the proper channels for lawful immigration status in the United States, experienced cruelty akin to what they fled in their home country,” the suit said.

“Defendants manipulated them, stripped them of their dignity, deprived them of their liberty, bodily autonomy, due process and equal protection under law, and impermissibly interfered with the Federal Government’s exclusive control over immigration in furtherance of an unlawful goal and a personal political agenda,” it continued.

Meanwhile, DeSantis’ office pushed back against the suit, calling it an act of “political theater.”

“The immigrants were homeless, hungry, and abandoned—and these activists didn’t care about them then,” DeSantis’ communications director, Taryn Feske, said in a statement. “Florida’s program gave them a fresh start in a sanctuary state and these individuals opted to take advantage of chartered flights to Massachusetts. It was disappointing that Martha’s Vineyard called in the Massachusetts National Guard to bus them away from the island within forty-eight hours.”