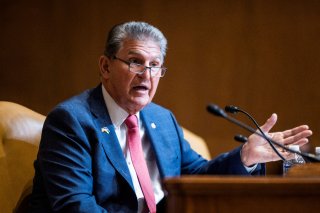 A handful of Democratic and Republican senators—including Sen. Joe Manchin (D-W.Va.), a conservative Democrat who played a key role in blocking President Joe Biden’s Build Back Better spending bill at the end of 2021—sparred during a panel at the World Economic Forum in Davos, Switzerland, an exchange that helped to showcase Manchin’s ongoing differences with the Republican caucus as rumors fly that he has considered switching parties.

In the remarks, entitled “The View from Capitol Hill,” Manchin clashed with Republican senators over the economic outcomes from President Donald Trump’s Tax Cuts and Jobs Act of 2017, which offered the most substantial tax cut on U.S. taxpayers and businesses in two decades. Manchin argued that the cuts functioned as a handout to wealthy Americans, whose comparative tax burden decreased following the law’s passage and who had much more to gain from increased stock valuations in the aftermath of the tax cut. He observed that rather than passing the savings in corporate taxes on to consumers, many companies used them to purchase shares of their stock, increasing their stock value but making little overall change to the fundamentals of the company.

“The cuts of 2017 was the only thing that every Democrat agreed was weighted unfairly,” Manchin said on Monday. “That was our impression.”

“What we need is a competitive tax code that spins off enough for us in the United States to take care of ourselves, pay down our debt, and live within our means,” he continued. “You can’t do that with the existing tax code we have, unless you slash everything to the bone.”

Republicans on the panel criticized Manchin’s remarks. “If Democrats continue in government, they’re likely to chip away at” the Tax Cuts and Jobs Act, Sen. Roger Wicker (R-Miss.) said afterward, arguing that the Trump-era tax cuts had been “the most successful … the United States has ever seen.” Manchin shot back that the Trump-era tax cuts had also been the “most regressive.”

Polls have shown that most Americans view the United States’ growing wealth and income inequality in starkly negative terms, although Democratic efforts to overturn the act’s provisions have so far been unsuccessful due to united Republican opposition and the opposition of Sen. Kyrsten Sinema (D-Ariz.), who, along with Manchin, has emerged as one of the most conservative Democratic members of the Senate. On tax issues, Manchin has largely aligned with the rest of the Democratic caucus, advocating for higher corporate taxes and suggesting that U.S. companies’ tax rates should be raised to 25 percent per year.