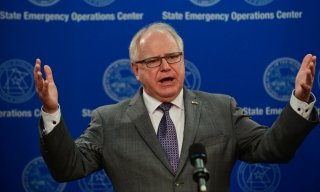 After the government sent out three stimulus checks to most Americans in 2020 and 2021, federal stimulus checks have almost certainly become a thing of the past. But in the meantime, some states are stepping up with stimulus plans of their own.

California has already passed multiple versions of the “Golden State Stimulus.” Gov. Jared Polis of Colorado has sent out his “Polis Stimulus Payments,” while some other states have passed their own child tax credits since the federal child tax credit expired at the end of 2021.

Minnesota is yet another state that has floated the idea. Gov. Tim Walz, earlier this year, proposed a round of “Walz checks,” which, according to the original proposal, would have sent out 2.7 million checks to Minnesotans, paid for from the state’s considerable budget surplus.

“It’s about making sure we’re lifting up those who are hurt hardest during the pandemic, and it’s making sure that there’s a long-range vision about where Minnesota is going—and [the] world economy—and we are well-positioned to do that,” Walz said in January.

The proposal isn’t final, but the governor is still pushing for it. According to Fox 9, Walz is now calling for direct payments of $500 to single adults who make under $164,400 a year and $1,000 per couple making less than $273,470. This would cost about $2 billion, which is much more than in the governor’s original proposal.

Some legislators in the state have instead proposed a summer gas tax holiday, but Walz is sticking with the proposal of direct payments. The holiday was proposed by Democrats in the state’s divided legislature, and Republicans are backing a tax cut.

"It's quite a few fill-ups that you could get out of $1,000," Walz told reporters in a visit to a gas station, per Fox 9. "I think this money in the hands of folks before summer would make a good difference. And it’s fiscally responsible.” He did say, however, that he would sign a bill for a gas tax holiday were the legislature to pass it.

The checks have been described as “Walz Checks,” just as stimulus checks were called “Jesse Checks” when the state had a budget surplus in the late 1990s during Jesse Ventura’s single term as governor.

"The idea that you’ll run out the clock and maybe roll the dice that you’ll get the money to spend it all yourself, to me, it’s just not moral to do that," Walz told reporters Friday.