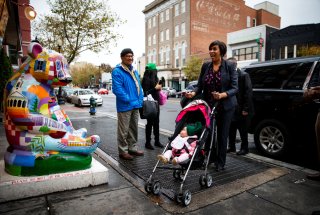 Over the course of the seemingly never-ending coronavirus pandemic, Congress has stepped in to approve three much-needed stimulus checks for most Americans.

However, for many financially struggling, pandemic-weary Americans, those three direct payments were far from enough, as the new Omicron variant and surging inflation have continued to make life challenging for tens of millions of hardworking people. With this in mind, can Americans really expect more stimulus checks to head their way?

It is true that many have already given up hope due to both the White House and Congress staying mostly silent on the prospect of issuing more stimulus payments. But there seems to be a light at the end of the tunnel—and it’s coming from state and local governments.

According to BGR, Washington, DC recently launched a unique stimulus check program that targets mothers. Called “Strong Families, Strong Future DC,” the program is slated to provide $900 every month to 132 new and expecting mothers in the city. The $1.5 million direct cash transfer pilot program is being orchestrated by the nonprofit organization Martha’s Table.

“Having a newborn is a big life change, and we also know how critical those first months and years are to a baby’s life. This program is about supporting new and expectant moms with cash so that they can have the autonomy and flexibility to make the best choices for them and their baby,” Mayor Muriel Bowser said while announcing the initiative.

A recent report released by LendingTree has discovered that the average cost of raising a newborn child is nearly $29,000, including housing, food, clothing, transportation, insurance premiums, and infant daycare. Mothers can expect to spend at least $300 per month on diapers, wipes, infant formula, and baby supplies alone.

“Welcoming a newborn is a cause for celebration,” Kim R. Ford, president and CEO of Martha’s Table, said in a statement.

“This direct cash assistance will mean that families can focus on bonding with their young child without being bogged down by the financial stress that often accompanies the first year of life,” she added.

It’s important to note that several states have also issued their own direct stimulus payments to eligible residents. Some of those states include Maine, California, Maryland, Florida, Georgia, Michigan, and Tennessee.

California governor Gavin Newsom has stated that there is a possibility that more stimulus checks could be approved in the coming months, and Minnesota governor Tim Walz recently announced a plan to provide $700 million in direct payments to state residents.

“To continue growing Minnesota’s economy, we must invest in the people who made it strong in the first place,” Walz noted in a statement.

“This plan builds our economy by putting people—our strongest asset—at the center of the blueprint,” he continued.

The proposal would need to pass the Minnesota legislature before becoming law.