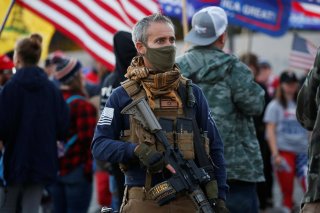 The New Jersey Assembly and Senate introduced a sweeping gun bill on Thursday that would significantly restrict when and where firearms can be carried outside of the home, according to a new Politico report.

Touted as “the nation’s strongest measure concerning concealed carry,” the legislation would require residents who want to buy a gun to purchase liability insurance and complete additional gun safety training. Additionally, individuals with mental disorders or alcoholism would be banned from getting a concealed carry permit.

Politico reported that the bill is now on the legislative fast-track, as Assembly speaker Craig Coughlin confirmed that it would be heard in committees on Monday. It is expected to be voted on in the lower house on October 27.

“We have to protect New Jersey and that's what this bill has done,” said Assemblymember Joe Danielsen (D-Middlesex/Somerset).

“For me, as a responsible law-abiding citizen, this bill really changes very little. But for millions, this bill will provide the safety without constitutional conflict,” he continued.

Meanwhile, Gov. Phil Murphy has already vowed to sign the bill, which comes in response to a Supreme Court ruling in June that struck down a New York law prohibiting individuals from carrying guns in public.

“The Governor’s goal was ensuring that residents of and visitors to our state could be confident in their safety in sensitive locations such as daycares, hospitals, stadiums and public transit,” Murphy’s spokesperson, Alyana Alfaro-Post, said in a statement.

“The administration has worked closely with the Legislature to draft legislation over the last few months, and the Governor looks forward to signing this bill into law after it moves through the legislative process,” she added.

Coughlin noted that “we’re doing this because we know that gun safety does not conflict with safe gun ownership.”

“While I respect the institution of the United States Supreme Court, candidly on this one, they got it wrong. The introduction of more guns into the public sphere makes us all less safe,” he continued.

However, a legal challenge could be coming from the Association of New Jersey Rifle & Pistol Clubs if the measure becomes law.

“These attacks by New Jersey lawmakers on right to carry are a big middle finger to the U.S Supreme Court,” Scott Bach, the group’s executive director, said in a statement.

“We look forward to overturning these measures in court and forcing the state to pay our legal fees,” he concluded.