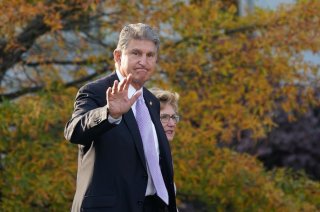 Last December, President Biden’s hopes for passing his Build Back Better spending package were put to an end when Sen. Joe Manchin (D-WV) declared his opposition to the bill, therefore dooming it in the Senate. Subsequent reporting showed that Manchin was particularly opposed to the bill’s one-year extension of the expanded child tax credit, reportedly stating that he worried recipients would spend the money on drugs.

Any major bill passing through the reconciliation process would likely require Manchin’s support, as his opposition would leave the Democrats with fewer than fifty votes. Manchin has said multiple times in recent months that the Build Back Better framework is “dead,” although the door was left open for negotiations on a scaled-down version of the legislation.

A new report looks at the form that such talks might take. E&E News, a publication geared towards energy and environmental professionals, reported Wednesday on signs that Senator Manchin “is ready to resume negotiations” on a scaled-back version of the spending package.

The publication cited five sources, including “environmental advocates, lobbyists, and senior congressional staff members,” stating that Manchin is eying April and May as the goal to come to an agreement. In addition to his pivotal role as the fiftieth vote for Democratic legislation, Manchin is the chair of the Energy and Natural Resources Committee.

The language in the bill, per the report, is “still in its most nebulous early stages.” But the talks may not be working directly from the draft that emerged from the Energy and Natural Resources Committee last December.

The report did not mention the child tax credit. Provisions mentioned include lowering the cost of prescription drugs, addressing climate change, and encouraging energy independence. Other Democratic senators have not yet given up on reviving the expanded child tax credit.

“Senator Manchin is always willing to engage in discussions about the best way to move our country forward. He remains seriously concerned about the financial status of our country and believes fighting inflation by restoring fairness to our tax system and paying down our national debt must be our first priority,” Manchin’s spokesperson Sam Runyon told E&E Daily.

“He has made clear that we can protect energy independence and respond to climate change at the same time. We must maintain energy independence by advancing an all-of-the-above energy policy to continue producing energy cleaner than anywhere else in the world.”

Even if such a framework earned Manchin’s approval, it would not necessarily gain the votes of every Democrat in both houses of Congress, especially if the climate language isn’t as strong as it was in the Build Back Better version last year.