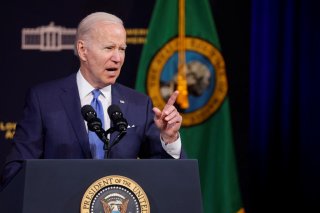 During an event in Washington state last week, President Joe Biden appeared to pin some blame on Sen. Joe Manchin (D-WV) for the expiration of the popular enhanced child tax credit payments.

“We lack one Democrat and 50 Republicans from keeping it from passing this time around,” he said. “But it really fundamentally changed the lives of millions of people.”

From July to December of 2021, the American Rescue Plan-approved measure provided eligible parents as much as $3,600 for a child under the age of six and up to $3,000 for children between ages six and seventeen. Broken down, this amounted to a $250 or $300 payment for each child each month. These eligible households were also entitled to the second half of the tax credit money if they filed a federal tax return this year.

For these enhanced credits to continue for another twelve months, Democrats need to pass the highly contentious Build Back Better bill. The bill has stalled, largely due to opposition from Manchin, who, like most Republicans, contends that extending the credits would only discourage people from working and that any additional federal spending will only exacerbate inflationary pressures.

In a statement to Insider, Manchin spokesperson Samantha Runyon said that “Sen. Manchin has always supported the existing child tax credit that is still in place despite the pandemic emergency enhancement sunsetting at the end of 2021,” adding that he supports policies that reward “hard-working families” amid record-high inflation.

“He has also made it clear that any change to our social safety nets should move through regular order,” she continued.

Without Build Back Better, the maximum child tax credit has fallen by $1,000 per school-aged child and $1,600 per child under six. Moreover, millions of the nation’s lowest-income families have become ineligible for the credits once again.

And it appears that this is already having dramatic consequences. Research from the Center on Poverty and Social Policy at Columbia University revealed that 3.4 million more children lived in poverty in February compared to December, an increase of 38 percent.

Moreover, a survey by ParentsTogether Action has found that approximately 20 percent of parents admitted that since the monthly payments came to a halt, they haven’t been able to afford enough groceries. In addition, 57 percent claimed that it will be more difficult for them to meet their family’s basic needs, and 22 percent said that they will no longer be able to meet their family’s basic needs.

“After half a year of child tax credit payments, it is clear that American parents have used this money to pay for the basic necessities families need: food, housing, and childcare,” Bethany Robertson, co-director of ParentsTogether, noted in a statement.