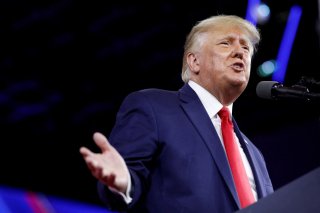 Back in January, DirecTV announced that it would not renew its contract to carry One America News (OAN), the conservative news network that was associated with conspiracy theories about the 2020 presidential election.

“We informed Herring Networks that, following a routine internal review, we do not plan to enter into a new contract when our current agreement expires,” DirecTV said in a statement back in January. The contract is set to run out in April.

DirecTV and Verizon Fios are the only major pay-TV providers that carry OAN, which also has a streaming element.

The announcement led former President Donald Trump to call for a boycott in January. A Trump-affiliated fundraising mailing list also put out a letter under the former president’s signature calling for boycotts of DirecTV, AT&T, and Comcast.

“AT&T, a majority owner of DirecTV, is banning the very popular One America News Network (OAN) because too many people are watching. I'm calling on all Conservatives to steer clear of DirecTV, and while you're at it, the same goes for "Concast's" [sic] Xfinity as well,” the fundraising email said. It added that the effort was seeking one million signatures, although it’s unclear where those signatures would be directed.

Now, there are new efforts to strike back at DirecTV’s decision.

Herring Networks, One America News’ parent company, has filed a lawsuit in California against DirecTV and AT&T, which owns a majority stake in DirecTV, for breach of contract. The suit alleges “breach of contract, breach of the covenant of good faith and fair dealing, intentional interference with business expectancy and violation of California’s Unfair Competition Law.”

AT&T owned DirecTV outright until last year, when it spun off the service into a separate company, although AT&T retains a majority stake.

“This is an action to redress the unchecked influence and power that Defendants have wielded in an attempt to unlawfully destroy an independent, family-run business and impede the right of American television viewers to watch the news media channels and programs of their choice,” Herring Networks said in the suit. It also accused “liberal organizations” of pushing AT&T to drop the service.

It’s not clear how DirecTV would be breaching their contract by choosing not to renew it.

Reuters reported last October on the previously unknown role that AT&T had played in creating and building up One America News.

This is not the only lawsuit currently being fought by One America News. The network was sued last year for $1.6 billion by Dominion Voting Systems after the network trafficked in baseless conspiracy theories that Dominion played a part in efforts to rig the 2020 presidential election. Also named in the suit are CEO Robert Herring, his son and president of the network Charles Herring, and correspondents Chanel Rion and Christina Bobb.

There’s another effort from the right to combat DirecTV’s dropping of One America News: six Republican attorneys general are urging the satellite company to keep the network. The letter was authored by Texas attorney general Ken Paxton and co-signed by his counterparts in Louisiana, Mississippi, Missouri, Montana, and South Carolina, Bloomberg reported.

“My fellow attorneys general and I strongly recommend that you reconsider your present course and renew your contract with OAN in April,” the letter, addressed to DirecTV CEO Bill Morrow, said. “Your failure to do so will not only cause you to lose millions of dollars in business but also drive many millions of Americans to simply cancel your services outright.”

Many Americans recently dropped their DirecTV service, with the company’s satellite service losing an estimated 1.9 million subscribers in 2021, according to a recent report by Leichtman Research Group. However, all of those losses came prior to the decision to drop One America News.

“Obviously, these inflammatory accusations against OAN are ridiculous,” the letter continued. “And even if they weren’t—that is, even if OAN were more accurately construed as simply representing a different perspective from the legacy media’s liberal orthodoxies—that’s precisely what your majority owner AT&T wanted when it signed OAN: viewpoint diversity.” And in a line that seems to question the results of the 2020 election, the letter adds that “those values appear to have changed dramatically in late 2020 when the legacy media decided Joe Biden was the next president.”

It’s not clear what power state attorneys generals would have to prevent a satellite broadcaster from declining to renew its contract with a specific channel. The OAN lawsuit was filed in California, which is not one of the states involved in the letter.