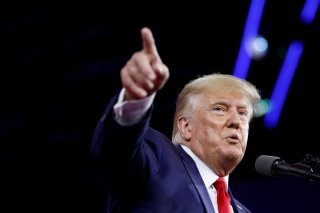 In recent months, former President Donald Trump has frequently ripped DirecTV, as well as its parent company AT&T, for DirecTV’s decision in January to stop carrying the conservative news channel One America News (OAN). Trump has hinted at and directly called for boycotts against DirecTV and AT&T, but also against Comcast.

Now, Trump is calling out another big media company for dropping One America News. But that doesn’t appear to have actually happened.

On Monday afternoon, Liz Harrington, a Trump spokesperson who frequently tweets his statements, sent out a statement on behalf of Trump that criticized “Time Warner” for having dropped OAN.

“Time Warner, the owner of Fake News CNN, has just announced that they will be terminating a very popular and wonderful network (OAN),” the statement read. Trump went on to attack “heavily indebted Time Warner and Radical Left Comcast,” for their “virtual monopoly on news.”

The problem is, the Trump statement doesn’t make much sense.

It was DirecTV that announced that it was dropping OAN. DirecTV was formerly owned by AT&T until it was spun off from the company last year. And while AT&T continues to own a majority stake, DirecTV is now its own company. Moreover, they didn’t “just announce” the OAN move—it was announced back in January, and Trump has been talking about it ever since.

Time Warner was the media company that AT&T purchased during Trump’s presidency, although it hasn’t been “Time Warner” since that purchase—it’s now called WarnerMedia. Furthermore, WarnerMedia is in the process of being spun off by AT&T to Discovery Networks.

At any rate, WarnerMedia had nothing to do with DirecTV’s decision to drop OAN. And Trump’s hated “Fake News CNN," after the spinoff, will be part of the Warner-Discovery entity, while no longer having anything to do with AT&T or DirecTV.

Trump was president during the time of the AT&T-Time Warner merger and even actively sought to stop it—usually citing his longtime enemy CNN—but the merger ultimately went through.

Further confusing matters, an Independent story on the issue referred to Trump lashing out against “Time Warner Cable” for having dropped One America News from its cable systems. There used to be something called Time Warner Cable, which was the old Time Warner cable arm, but that hasn’t existed since Time Warner sold it to Charter Communications—which later became Spectrum—in 2016.

In the ex-president's defense, the history of mergers is very complex and difficult to follow. But Trump’s statement, much of the media coverage, and social media reactions from both the pro-and anti-Trump sides imply that a major carrier just announced that they are dropping One America News. That is not the case at all.