Pence vs. Haley vs. Pompeo: Who Wins the GOP 2024 Presidential Race? 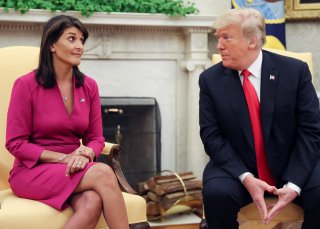 It may seem premature to speculate about the 2024 presidential race, especially since we’re just entering the intense phase of the current campaign. Furthermore, clouding any attempt at forecasting, many analysts question President Donald Trump’s chances for keeping hold of the White House amid unprecedented economic calamity. A Trump failure would lead to a very different 2024 primary fight than one in which he played kingmaker.

In reality, it is unlikely that voters will cast out the president who restored the economy to healthy expansion and fast-growing wages before the coronavirus outbreak. His plausible ability to repeat his previous economic feats will be compelling, especially when contrasted with a lackluster Democratic nominee from an administration whose specialty was economic stagnation.

This then raises the question of whether against all odds Trump will gain the historical credential of a truly great president: getting reelected and then being able to ordain his successor. In modern times, this is extremely rare, occurring with Theodore Roosevelt (who passed the baton to William Taft), Calvin Coolidge (Herbert Hoover), Franklin Roosevelt (himself), and Ronald Reagan (George H. W. Bush). Presidents who achieved this feat not only redefined their party but the politics of their time.

Far more common in history is for voters to opt for a change in the party controlling the executive branch after eight years, as has occurred with the past three presidencies. But the neat consistency of this pattern that began in 1992 is one reason to call it into question: American politics is seldom so predictable for so long. Furthermore, the decline of the Democratic Party into woke progressivism and repugnant identity politics will take a lengthy stay in the political wilderness to reverse.

So who is in the early running?

The first thought for a successor will always be the incumbent vice president. Mike Pence, about to turn 61, is a successful former governor who often has the challenging job of turning Trump’s whirlwind into governance. Any veep lives in his boss’s shadow, which can be diminishing, and Pence’s public stoicism bordering on stiffness exacerbates this handicap. It is difficult to see him strutting the stage at a rally like Trump or tearing into reporters or debate moderators. But these qualities may not be as essential in 2024 as they were in 2016: after inflicting eight years of trauma on the establishment, a more reserved approach based as much on power as insurgent blunt force may be in order. Pence may be the man to consolidate the revolution.

The current crisis plays to Pence’s advantage: his oversight of the coronavirus task force has been effective, and memories of recovery from the virus’s economic collapse will still exist in 2024. An argument that a vote for Pence will keep the money rolling in could be compelling, and a Trump endorsement of his trusted lieutenant would be difficult for opponents to overcome—assuming he grants one.

Next up is Nikki Haley, the former governor of South Carolina and U.S. ambassador to the United Nations. Many Republicans would love to vote for a woman and a minority, especially one who exults equal opportunity rather than wallowing in grievance. If elected, Haley would turn 53 on her inauguration day, becoming our first Generation X president. Aesthetically Haley might come closest to Trump: she literally smiles when confronted and clearly loves fighting. Her biggest challenge may be staying in the spotlight over the next four years without high office.

Secretary of State Mike Pompeo is rumored to be eyeing a two-step promotion to the presidency. Pompeo should be a bigger hero among conservatives than he is. He is easily the most conservative and effective top diplomat of what Trump joked is the “Deep State Department” since Jim Byrnes in the Truman administration or John Foster Dulles in the Eisenhower administration. If he continues in his position into a second Trump term, he will have completed a fundamental shift in American foreign policy to focus on China. The good news for Pompeo is that some secretaries of State have become president, starting with Thomas Jefferson. The bad news is that the last one to do so was James Buchanan, who preceded Abraham Lincoln. American voters are notoriously insular and acumen at foreign policy is often of secondary political appeal.

Then come the senators, who, the joke goes, all see a future president when gazing into the mirror. Rand Paul is likely to run, and a pro-freedom, libertarian-leaning deficit hawk may be in vogue by 2024. His brand of non-interventionism and opposition to tariffs on China would require a different world setting that today to be viable.

Marco Rubio likely wants to run again, but may be too neoconservative. The other Florida senator, Rick Scott, governed his state, has more financial resources, is closer to Trump in policy and sentiment, and favors decoupling our economy from China. Happy warrior Ted Cruz came in second to Trump in 2016 and spared America from Beto O’Rourke. Tom Cotton, who just turned 43, is ambitious and has impeccable conservative credentials. All of these prospective candidates will be on guard for an outsider insurgent like Trump—and prepared if one begins to emerge.

The key question for voters will likely be who can extend the most attractive elements of Trump. For GOP primary voters, this is more of an aesthetic than a set of policies—it is a willingness to fight and stop the cultural war of the media-progressive complex. For general election voters, economic issues will probably be more important. The mantle is up for grabs.