Poll: Half of Americans Planning to Travel This Summer (Vaccine Passports or Not) 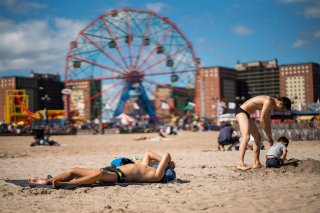 Slowly but surely, the pandemic is coming to an end.

More than two hundred million vaccine doses have now entered American arms, and President Joe Biden has set an ambitious (though uncertain to be achieved) goal of partially or fully vaccinating seventy percent of Americans by July 4. A number of private companies have announced giveaways if this goal is met, and several states have even implemented “vaccine lotteries” to incentivize uncertain Americans to vaccinate as quickly as possible.

While even this number is far away from the vaunted “herd immunity” required for life to fully return to normal, it is a promising sign that some degree of normalcy is on the way. And while many doors remain closed to unvaccinated Americans, the introduction of “vaccine passports” promises to open up some degree of travel once more.

This is good, because, vaccine passports or not, Americans are going on vacation.  Business Wire reported in April that 50 percent of Americans surveyed in a Points Guy / Healthline Media study stated that they intended to travel at some point between June and September. Altogether, 23 percent of Americans are somewhat likely to travel, and 27 percent are very likely; the numbers rise further for richer Americans (70 percent) and those with children (65 percent), many of whom have presumably been enclosed in their homes with those children for the past year.

Fortunately, vacation spending is predicted to stimulate the economy. Nearly half of those who suggested they would travel also planned to spend $1000 or more at their destinations, and 20% suggested they would spend more than $2000, suggesting that many intend to make up for lost time during the year of quarantine.

Officials are justifiably worried about the danger of COVID-19 spreading across the United States during these excursions. However, many of the trips planned seem to be appropriate for social distancing and COVID-related precautions. Road trips, national park visits, beaches, and camping are four of the five most popular choices – although going to sporting events, visiting cities, and attending theaters or indoor events are also on the list, suggesting a possibility of super-spreader events. Most Americans also perceive a need for safety measures on their trips, with a tiny minority – 15 percent – recommending that no safety precautions be taken. (The minority is significantly more pronounced among Americans who do not intend to take the vaccine but want to travel anyway.)

Of those who do not intend to travel, the most common objection has been affordability, an understandable concern during the economic crisis. Others have said that they are simply not interested in taking a vacation, that they are worried about their health, and that they do not want to follow mandatory COVID-19 guidelines.